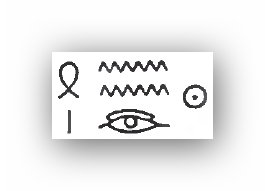 U,
Along with the last post #9006, the following are some additional points.

ABOUT YOUR STATEMENT:
“The main ideograms these days are logos used for branding and for brainwashing consumers, thus increasing the corporate sales and profits, while decreasing the mental capacity for self-sustainablity and for enlightenment of the people/the masses/rekit at the same time. This is an example of how this ancient technology is being used for evil and capital gain at the expense of humanity and the planet.”

FEEDBACK
I think it is insightful the recognition that the present day logos, idioms, colloquialisms, etc. are used for negative intents either purposefully (evil) or otherwise. It is interesting to note that the same human capacity for gaining the higher aspects of language through the aesthetics of a conceptual basis can also be corrupted as we have seen.

ABOUT YOUR STATEMENT:
“It works by opening up closed, unused, blocked off parts of your brain and your mind to be open to receive the Teachings; by filling each Tat with so much wisdom consciousness devotion information and feeling that you are led to enlightenment by reading, re-writing, studying, repeating, chanting, discussing, reflecting sharing singing and then meditating and acting upon the teachings that are contained within the writings. It works by expanding your consciousness to embrace the teachings so that you can be enlightened. The process of reading the glyphs alone is enough to expand one’s ability to comprehend the teachings, however, to only read the glyphs, without attempting to gain understanding of the teachings, would be a disservice and is not encouraged.”

FEEDBACK
On the whole this is a very good statement, keeping in mind that the brain is merely the instrument of consolidation of sense perceptions followed by lower cognition in relation to the perceived ego relationship. The process of reading anything without the benefit of not just understanding but also wisdom and ethical conscience, can be the downfall even of the Kemetic Language readings. Considering how supposedly erudite personalities like Barack Obama can read and teach the constitution and then proceed to commit drone bombing atrocities, torture people, imprison whistleblowers, and issue hit list kill orders on a weekly basis is a case in point of someone who understands the legal issues but without ethical conscience or higher human caring for humanity.
HTP