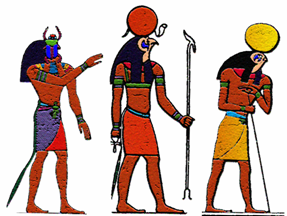 Udja
Very good
ABOUT YOUR STATEMENT
“-The myths included within religions often do not require their followers to undergo any higher self-discovery. Sebai MAA mentioned an example of this being the promising of seventy-two virgins by the Islamic faith. I also wonder about this claim because this has to do with a worldly desire of the lower self of most men. How can one make such a promise and fulfill it on another plane of existence?”
Definitely, there are many claims presented in orthodox faith-based religions and since those FB religions are literally interpreted then any mythically intended statements are routinely treated as literal events of the past or future. The number 72 occurs in other religions and legends. For example, in Ancient Egyptian mythology the God Set, the nemesis of Heru and Ra, has 72 minions that assist his nefarious actions. In other ancient wisdom, the number 72 takes on varied mythic, astronomical references that provide insights into the nature of human existence and the nature of Creation that aids in the understanding of life and the movement towards mystic enlightenment experience.
When such mythic and mystic references are accepted as literal, the mythic and mystic wisdom becomes calcified, as it were, frozen in place, while people act on it out of delusion and ignorance that leads to internal and external conflicts.
Therefore, one of the most important aspects of spiritual life, especially in the beginning, is to understand the purpose and process of mythic wisdom as that foundation allows a human being to progress on the mythic path that leads to mystic spiritual realization of the higher self instead of a mythic distortion that leads to egoism and more reincarnation.