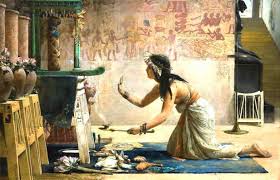 After years of living ordinary life, as a regular worldly person, but more recently feeling disappointed about the “ups and downs” of life, being that I had what by all measures should have made a person happy with the “nedjemnedjemyu” up to that time, that satisfaction was elusive; so I was practicing yoga and reading all kinds of books on history, religions, culture, etc. and was seeking and researching world literature about spiritual matters as I had turned away from religion years ago. One day I was reading a book about mystic philosophy where it was explained that we as human beings do not survive death as explained in western culture, but rather in realizing oneness with all-pervasive spirit. For reasons of aryu at that time that explanation made more sense than the bible bodily resurrection and be with the father etc. etc. so it was like a relief, like pheuhhhhhhh….and then and there I knew that to be true but this was not nehast (full enlightenment), but yes, an epiphany of sorts that became a foundation for real and dynamic spiritual life. The deeper implications of the realization meant that Creation and everything in it was illusory including family, friends and the very perceptions of reality. Those realizations became clearer in the next few years as intellect became honed and feelings became recognized as possessions instead of as forceful needs emanating from or expressing who I am essentially.

“What we are truly seeking is not happiness, but bliss, yet we get caught up in the illusion of nedjemnedjemyu instead of Nehast which is indifferent to happiness or sadness. It was that moment of clarity that struck me as an “AHA” moment and it came in an instant in a single word. I also appreciated Seba Dja’s commentary that if one attains Nehast they can still partake of the sweetness in life. I interpreted that to mean partaking, yet not being invested in the sweetness of nedjemnedjemyu.”

Indeed, the investment is key and more specifically, te investment is supported by ignorance (lack of enlightenment); the true desire is bliss (unhindered happiness) but while life is experienced as “nedjemnedjemyu” the happiness derived from worldly pleasures is ascribed to the world as its source. In reality “nedjemnedjemyu” is only partial, i.e. modulated happiness and this it is susceptible to fluctuation and that fluctuation produces times of absence of “nedjemnedjemyu”. Since that “nedjemnedjemyu” when experienced as worldly sourced, acts as a drug, the personality (founded in the aryu of the person) becomes as if addicted to it. A wise person is to realize that the source of any “nedjemnedjemyu” is the spirit and since the spirit is one’s own source as well then the source of bliss (un-nefer) is actually everywhere including within. Therefore, having discovered that bliss within which is like a vast ocean of happiness that cannot run out or fluctuate, the experience of pleasures from the world become like a river entering that ocean, a river does not really add to the ocean or if we say it does it is inconsequential. So in a state of Nehast the addition of worldly pleasures is like the river into the ocean and therefore, one in a state of Nehast is indifferent. Therefore also the discipline leading towards enlightenment is indifference or at least to make effort in thinking and feeling indifference towards worldly pleasures such that they will not be sought after but only experienced in the course of life. In this state then the experiences of “nedjemnedjemyu” would not be injurious or infectious to the Ab (unconscious mind) and therefore can be experienced on this basis, if handled in this way successfully, without detrimental effect.

Now, if full enlightenment has not been reached and “nedjemnedjemyu” will be experienced then there is remaining danger so the aspirant must remain vigilant before, during and after the experiences so that they do not become agreed with experiences that will add to and build the storehouse of worldly aryu that the aspirant is working to reduce. The best action is to avoid and and redirect devotion and derive pleasure from experiencing the Divine in all things including “nedjemnedjemyu” and mostly from the source of all pleasure which is Neter itself at the core of all being; if not avoided or experienced in full redirected manner, then at least experienced with awareness and infusion of wisdom to neutralize the detrimental effects such that they will become aryu of pleasure with wisdom and not pure worldly pleasure aryu.