FROM: Teachings of the Temple of Aset verse: 110 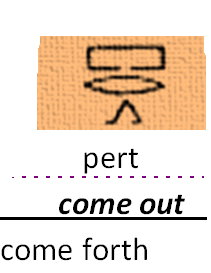 Indeed, the term “Pert” is a pivotal expression / idiom in Neterian philosophy. IT is so important as to occur in the title of the scripture genre of the “Book of the Dead” –PERT-M-HERU. The term implies coming forth or out of something and into something else and that something else is the heru, which here means light and the light that comes from a fully realized Heru divinity, the god of Light.

In the teaching of the Temple of Aset the term “pert” is used in its literal/nominal form in some places, as in verse 99; So it can mean literally something coming out of somewhere or it can mean a metaphoric coming out. The enlightenment coming out is metaphoric like when you turn on a light in a dark room. Can we tell the darkness to “come out” of the room and let light in? Where did the darkness come forth to? If a person becomes enlightened their mind is like that dark room and the light of spirit [Akhu] is said to go in (as will be discussed in the short lecture series of the Amun Witnessing Consciousness Reflection and Meditation System) but there is no coming out into a physical light. It is a metaphor relating to what happens when the personality becomes illuminated with self-knowledge, like when a person remembers something they were trying hard for a long time to remember. Where did the ignorance go? And wasn’t the memory always there but just temporarily lost/misplaced/forgotten?
In verses 103/104 we go back to the metaphoric form for there is no word or literal or physical form in which the name of Ra can “come forth”. Therefore, it must be experienced as that light that illumines the room and the switch is the shedy process. But the actual occurrence of the coming forth of the name, which metaphorically means light of self-knowledge, that occurrence is an experience, and like the memory, it is a discovery that Aset’s, and our, true being is discovered thereby.

In this way, an aspirant is to understand the nature of the coming forth as not a literal but rather metaphorical occurrence; here I use the word occurrence instead of event as in this context, the meaning of Ra’s incapacity to speak his name and its attainment requiring an experience of entering into his nature, refers to an idea scarcely explainable with any language; though metaphoric language, when the concept and intent of the metaphor is understood, conveys the meaning in the best way possible in accord with an aspirant’s capacities to understand first with intellect and then with intuitional capacity.