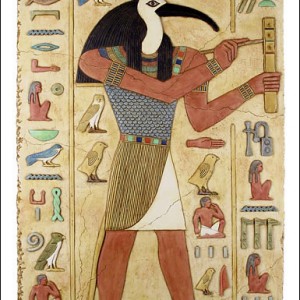 Udja
Good summary and reflections.
A) That key in the mysteries of Hetheru is the difference between enlightenment or worldly intoxication. The idea of the myth is to state that if one engages the world but adds the ingredient of spiritual experience through shedy, through spiritual practice and infusion of spirit into one’s life, then the worldly aspects of life do not overwhelm the personality and in fact the spiritual aspect allows the personality to become divine. So the triune infusions a person can take in, ego, worldliness and spirituality, are the proper ways to live and not just with egoism and worldly interests since that road led Sekhemit to delusion and amnesia, as it were. This is one of if not the most important teaching of the Mysteries of Hetheru and Djehuty. It is a pivotal turning point in the plot of the myth. It also means that the sedjert or ritual drink given by Lord Djehuty, is actually not just an actual substance to be imbibed but represents the three infusions of life and the psychomythological idea of what Lord Djehuty provides in a psychic sense. Lord Djehuty represents lucid intellect. Therefore, the cleansing and retraining and opening up of intellectual capacity, that leads to knowledge of Ra (Spirit) for the previously ignorant person, that is the mixture of shedy and wisdom studies in the life of an aspirant.
Then as that intellect leads Sekhemit gradually back to knowledge of self there is a point where she has an epiphany or realizing what she has forgotten, that she is actually also Hetheru. That epiphany in this mystery teaching, is referred to as Aset or intuitional realization of the Higher Self.

B) Indeed, there are some remnants of higher intuitional wisdom in African Traditional Religions; however, much of that has become subsumed in the chaos caused by social, political and economic disruptions over the years and especially fomented by colonialism and neocolonialism and today globalism and neoliberalism, the attempt of the previous colonial and empire powers of the west to corporatize, commodify and destabilize all countries of the world for the benefit of western corporations. Thus the social order, traditions and memories of non-western societies has been severely disrupted and some damaged beyond repair due to not having a written record but only oral traditions that were interrupted.

C) the fish that ate the phallus of Asar and the one’s that guide the boat of Ra are different. The first represent worldliness and foulness of seafood and the other represents the lucid aspect.

D) Very good questions. In degraded (from our perspective) African Traditional Religions the possession is actually a trance wherein the personality is suppressed so as to allow the energies of nature (neteru) to have free reign in the personality. So if a person had negative feelings and wanted to do violence and energies of violence take over, then the action of violence would hold sway. In a state of self-awareness one may feel like doing violence but control that. When there is possession the energies take over and the intellect and will are shut down. If the energy is for bad then that manifests but if good that manifests. Also it can operate based on the aryu while the conscious mind has checked out.
This is not the higher perspective of the mysteries. The higher perspective is transforming the personality so as to purify it in such a way for it to allow the transcendental spirit to become evident and thus the personality gives way to that. That entity becomes (really always was) the master of the personality and all of the energies (neteru) operating in it. Therefore, the Neterian perspective is not to allow possession from the energies but rather to gain mastery over them by realizing and assuming the higher state of being from whence they arose in the beginning. This state is called “Ur-Uadjit” or winged sundisk or in other terms “all-encompassing divinity”. This is the higher perspective and goal of the true mysteries. This teachings is present from the beginning of Neterian written wisdom since the time of the Pyramid Texts. For more on these themes see the books African Origins and Comparative Mythology.
HTP