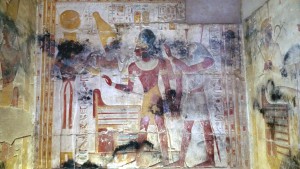 The point of the “battle between truth and untruth in consciousness” indeed is an advancing understanding as is the concept of metaphorical mythic wisdom whereby the characters of myth actually are to be understood as representing aspects of human consciousness for the purpose of the teaching’s, imparting of mythic wisdom philosophy that allows understanding and freedom from the very same psychological aspects of mind that due to imperfect cognition cause delusion.

“The variances in personalities/characteristics of the Neteru reflect the variances/trials humans face. The complementary force/principle/Neteru presents an alternative force which may be employed to overcome delusion and move closer to higher consciousness. Asar is the soul of all, Aset is the intuitional wisdom of all, Heru is the aspiration (enlightenment when actualized), of all. Balancing the ariu is foundational to preventing increased incarnations. We have the Neteru, their myths, trials, victories as a roadmap to reorienting the personality with the truth and not being caught in illusory divisions of time and space.”

This seems to rightly imply that these three neteru: “Asar, Aset and Heru” are themselves the foundation or essence in terms of wisdom, spirit and enlightened aspiration of all human beings. I would add that they are that also in a cosmic sense as well so they are those same elements but as well for all neteru and in fact all aspects of Creation. Therefore, if this mythic wisdom teaching were understood in its ultimate implications it would mean that the underlying essence of Creation is “Asar, Aset and Heru” and that is our manifested essence in time and space as well. And then more than that, as explained in the Temple of Asar final screen room, we who enter as enlightened beings are that intuitional wisdom soul and enlightened royal personality who sits on the throne. Yet the throne is one? Therefore, those three aspects “Asar, Aset and Heru” –“Intuitional Wisdom, Soul/Spirit and Enlightened being” –that is One, three in one and we also know who is three in one right?

Very good reflections – and henceforth to live by this is the creation of Taffy Shepsy and eventual piercing of Ra and of course the bleeding of life force and destruction of delusion leading to ultimate enlightenment.