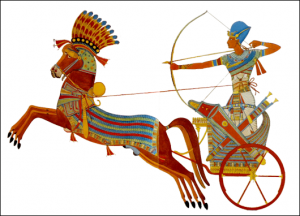 Rameses in chariot in battle against forces of unrighteousness

A good summary and explanation of the process of the Taffy Shepsy.

“I think this means a steadiness of the life-force energy in the higher psychological centers of the sefek ba ra. I gather this to further mean dissolving creation into its original state of non – movement, the nun, undifferentiated consciousness.”

Indeed it relates to the life-force though life-force operates in a field of duality dependent on another aspect of the personality so there are two main aspects of the issue to be discussed. Think of the life-force as a horse and the rider of the horse as mind. If the life-force is controlled then the mind can be controlled. If the rider (or chariot driver) is controlled then the horse will be controlled. So if wither are controlled that will facilitate the other. The discipline can be working on both at the same time or concentrating on one or the other. The ari (acts) of shedy: chanting, visualization, with a foundation of wisdom and dispassion facilitates controlling feelings (component of unconscious mind-aryu) and that leads to control of sekhem that fans the flames of mind to produce more agitations, more thoughts, and reveal more feelings and desires leading to more thoughts and actions, etc. in a virtually never-ending cycle of personality (ego) perpetuation and movement away from self-knowledge.

“– I gather that mythologically the boat (the sun disk) represents the vehicle that travels on the nun, undifferentiated consciousness.”

The following is included for levity: 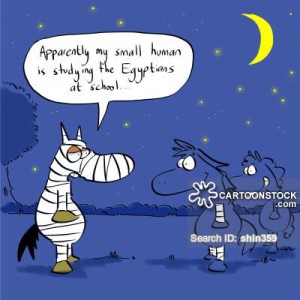 “Apparently my small human is studying the Egyptians at school…”