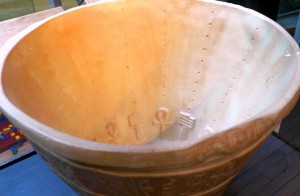 Very good comments and observations on the Ancient Kemetan culture.

Ancient Egyptian religion did conceptualize what would be referred to by outsiders as “heaven” and “hell”. However, when you examine the nature of the true teaching it is nothing like the conception in Christianity, Islam or Judaism or Zoroastrianism or the like kinds of religions. The Ancient Egyptian conception is more akin to that of Indian, Chinese and Native American religions in that “heaven” and “hell” are considered as weigh stations where the soul moves through transition periods depending on its aryu (what the Indians call “karma”). When you progress in your studies you will discover grater insights about this teaching. Suffice for now to say that the conceptions of “heaven” and “hell” in western orthodox religions probably did get those conceptions from Ancient Egypt but they took only the superficial aspect of the teaching and the deeper notions were left behind, discarded or misunderstood.

Ancient Egyptian culture affected and still affects the world today and out of dozens of possible examples just a few: the concept or resurrection, the hours of the clock and the months of the year. Again, more insights will occur about this as you progress.