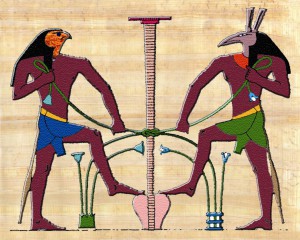 Firstly it is important to understand that Set represents the ego element or aspect of the human personality. The ego is never fettered, per-se, by the gods and goddesses but it is challenged by Heru (spiritual aspiration/redemption) and fooled by Aset (intuitional wisdom). The ego is an element of the personality while living in time and space and it can be beneficial or detrimental. When detrimental it is Set Peraah or the ego as the Pharaoh. When Set becomes nebi Ra or servant of Ra and protector of the boat then that Set (ego) has become purified and is a powerful help to spirit. 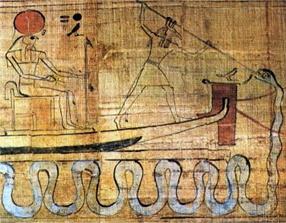 When Set is ruling it means the fetters of Set dominate the personality. When Heru is ruling and Set is Servant he and Heru become balanced and the power of the personality is supreme in internally and externally (in mind/spirit as well as in body). This is called Heru-Set Sema (the higher self and the lower self united. In other worlds “Egyptian Yoga”. Therefore, Set is not evil but rather misdirected. The task is not to fetter or destroy Set but rather to repair the imbalance caused by ignorance that led to the perversions in the personality that gave rise to the distorted sense of self (egoism) and the cruelty, greed, hatred, violence and unrest that ensued. When that is done the power of Set becomes an instrument of Spirit and that also means the advancing aspirant gains untold spiritual strength that allows overcoming worldly obstacles and achieving the goal of life.