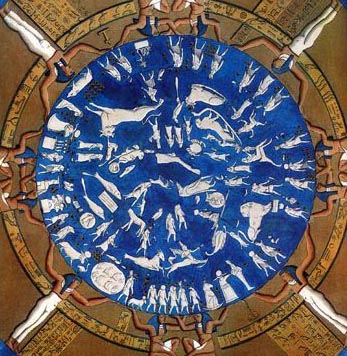 Udja
A good summary.
In reference to the color of Ancient Egyptian temple art the use of the color dark red was not just for denoting the Pharaoh. It was used for males in general in relation to religious architecture and teaching. Women could be depicted as yellow or white depending on the kind of iconographical intent-religious or secular.

The modern zodiac originated with the Ancient Greeks with a emphasis on a conception about astrological influences. The Ancient Egyptian zodiac used some of the same constellation elements but with different arrangements and also had some different ones and also had an astronomical aspect including eclipses.

The “hippo” icon in the Denderah zodiac relates to Goddess Taurt which in one interpretation means Great Earth. The is a goddess of birth, of source and of life giving essence. She is also an aspect of Hetheru and Aset. So it is no wonder to see Taurt appearing close to the center from which arises life and from which it projects out to the constellations of Creation and the forms in it.

In the myth of the Asarian Resurrection there is no mention of Heru coming out of the water “first” in terms related to cutting off the head of Aset as if to come out first for that purpose before someone else gets the chance. I was merely a plot event to depict a teaching about the relationship between aspiration and wisdom, which at times can be at odds when the ego gets the better of aspiration which causes it to lash out at its source of teaching. In a higher sense also it is the aspiration aspect of the personality cutting off the human aspect of wisdom to allow the more abstract and cosmic aspect to take its place.