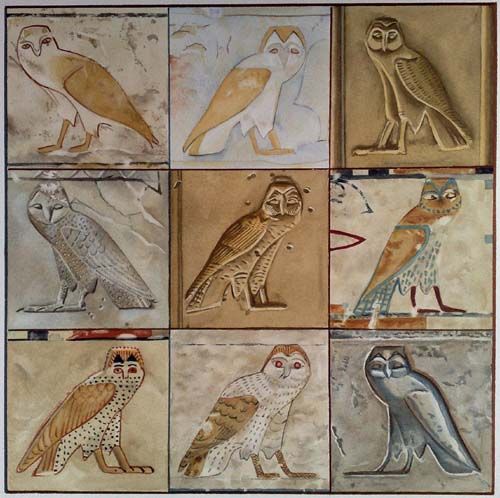 Indeed, I think it is perhaps the most if not one of the most important glyphs in the ancient Egyptian language for its phonetic, grammatical and philosophical importance. EM is the gateway to unraveling the mysteries of Ancient Egyptian scriptures and insights into the energy of transformation by the shape, countenance and gaze of the owl. No wonder the owl is a traditional symbol of wisdom in several cultures.

About your statement: “My understanding of this lesson is to be as Aset turning herself in her meditation into a sacred serpent, harpoon-like and very importantly not moving, waiting for the right moment to strike the exoteric aspect of Ra, his aspect of illusory creation. “

Firstly, on the insights into an nemu-nemu you are also referred to my post #6944. Indeed she is turning herself, her personality into the taffy shepsy and in the posting above there are important nuanced insights into the process. Also on the TTOA discussion session class of 7/11/16 there are some further expansions of the teaching. The important issue is going beyond the simple mythic devotional worship and the mythic wisdom aspects so as to move into the metaphysical/mystic aspects of the teaching and to realize the scientific process of creating the taffy shepsy and how one arrives at the an nemu-nemu state. It is not done consciously for one cannot force the unconscious mind to behave if it is impure. One can work with one’s physical (lower) aspects of the personality (ren, khat, ka) to, at the same time: 1-sublimate emerging negative thoughts feelings and desires while 2-cause the ren, khat, ka to experience positive wisdom, intellectual and emotional experiences that will act to replace the negative aryu and thus cause a cleansing and transforming process in the unconscious aryu and thereby allow to emerge the placid mind that will enter into an nemu-nemu spontaneously during formal and or informal meditation times. When this situation (an nemu-nemu) becomes extended (more than just short periods of time that may allow small glimpses of the transcendental divine within) then at some point there is piercing of Ra’s world illusion and entry into communion with transcendental being (Neter). When that piercing allows entry into the nature of transcendental essence beyond Ra sufficiently to realize fully one’s identity with “It”, then that is called nehast or enlightenment.