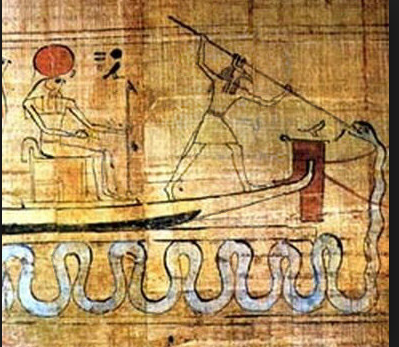 Set (ego) in service of Spirit

This very comprehensive essay post has displayed a good understanding of what I have been working to impart for many years relating to the issues of religion, the spiritual path and the problem of modern culture and religion. It displays the nuances related to the application of the teaching for our time. I have read the article thoroughly and find it generally sound in the understanding and I will review some items for greater clarity and insight and also correct a few typos and possible misunderstandings.

“With the invasion first from the Arabs and the Europeans over the last 500 years or so, the mystical essence of the culture was lost as a direct effect of colonialism followed by the death of the griots and a severe rupture in the traditional learning path.”

The Orthodox Christian invasion began at about 100 CE and the Arab invasion occurred earlier, in 600 A.C.E. The later, subsequent invasions and degradtions of African culture culminating with western colonialism and neocolonialism and now globalism, neoliberalism culminating in worldwide corporate oligarchy has occurred within the last 550 years.

The term you used “utopic” – should be “utopian”

The term you used “mediation” – should be “meditation”

The term you used “Nuke Asar” – should be “Nuk” (no explosives here please! J) Further down you used the correct spelling.

“Egyptian Yoga or Sema tawi is what is making the goal of Shetaut Neter possible. It provides practical and integrated ways on how to purify our conscious identification to physical realities in order to attain Nehast.”

I think your intent with this statement is correct but as stated could be confusing.

“That is why the meaning of the myth is never absolute and as people evolve in cosmic consciousness, more clarity is revealed about its meaning. It is a sacred language and that is why, it is said all societies need a myth to live by, which calls to what is transcendental, what we aspire to.”

Well said, the myths have some logical elements but they are not primarily designed to be examined with Rational, logical, linear or sequential literal standards. That standard relates to left-brain logical thinking backed up by egoism and self-serving corrupt ethnics and national perspectives. Therefore, it takes a true mythologist teacher to open the intended teaching of the mythic wisdom contained in the religion or spiritual system so as to convey the proper and beneficial understanding that leads to a truthful discovery of the unitary nature of Creation as opposed to the dualistic, mechanistic and egoistic ideal of western culture, which has dominated the world.

“The story depicted in the myth becomes the central theme of living in the society and represents the source of meaning for the people and that is why, it is said a Nation needs a myth to live by in a sense that the people need higher ideals to provide them with a sense of purpose in life, a sense that binds them together not only as a nation but as well goes beyond the exoteric aspect of life.”

Indeed, a nation, (if one must exist as opposed to just having ethnic groups that interact freely, as things were before the concept of nationalities was adopted) does need myth to live by, Joseph Campbell, perhaps the foremost mythologist of the 20th century also warned of how a society caught in the grip of left-brain mentality does not have access to the metaphysical aspects of myth and the myths they do develop become self-destructive, soulless pursuits that do not lead to human or personal insights but rather to empty lives and spiritual bankruptcy for individuals and the society. Now what I have just said segways into you statement further down:

“However, while the myth in its deeper aspect seems to be denigrated, the function that it plays has not disappeared whatsoever but has been replaced with ordinary beliefs that provide to people a limited sense of life and in that sense, leading to self-destruction.”

“In the myth of ASAR, it is related that after returning from spreading the teaching in the world, ASAR confused the wife of his brother SETH, Nebethet with his wife, ASET, and had intercourse with her. What that means is that through ignorance, we come to marry with the physical aspect of life as Nebethet represents the idea of living in the lower world. In that sense, it means that ASAR turned away from intuitional wisdom represented by ASET and from that point, became distracted and trapped by egoism, which is SET, the lower aspect of the personality.“

As there is progress in penetrating the myth it is better understand the nature of Nebethet as not so much something that is “lower” in a pejorative sense, but rather what is physical and temporal (in time and space). In contrast, Aset represents what is spiritual. Both have a role to play and both are in live with the soul (Asar), though his inebriation causes him to embrace Nebethet instead of Aset, nevertheless the soul is to embrace both but not in a state of inebriation but rather with insight and purity. Then their nature becomes a help instead of a hindrance on the spiritual path.

“At least, the acknowledgement of the worship at the designated time is what I do. I have assembled the ALTAR and, this provides a higher dimension to the practice particularly in the morning.

The devotion goes as well beyond the practice as one needs to develop a devotional attitude turning away from ego-centrism, an attitude that will help affirming the divine instead of ourselves. Ultimately, worshiping the divine implies gradual letting go of the ego self so that the divine self can express itself within us so we become an expression of it.
Ua Ua Meditation. My morning meditation is regular and is now done after the morning worship. I continue to use the hekau OM AMUN RA PTH with the fire visualization. I have developed a subtle awareness of the projection in time and space and the return to the primeval ocean. The chanting representing the projection in time and space of the OM in the form of trinity and the period of silence represents the return to the NUN. With the out breathing, I think about the projection in time and space alternating with in breathing and thinking about the connection to the primeval ocean, the point of no thoughts…With this new approach, the mind is calmer as I am alternating between both experiences. Also, prior to practice morning worship, I read a few lines of scriptures just to direct the mind to what I will be doing and I find this very helpful in fixing the attention to meditation itself.”

In a situation like this, of being in the workforce, the keys are 1) starting the day right with wisdom, devotion and meditation. If these are accomplished and to the extent of advancement in these, the rest of the day becomes colored with them and the glow lasts until coming home and the next dose of spiritual practice. Obviously there is always the intent to provide the best quantity of time though the quality can overcome many time issues.

“How can we master the precepts and take responsibility for our actions consciously without realizing the SELF? That raises another dimension when we want to relate to right actions, right thinking, etc…Who are the “we” or the “I” doing the action? Is it the conditioned one or the conscious one?”

Full mastery requires enlightenment but advanced mastery is more easily attained the more purity there is in the personality and the practice of maat philosophy; this is sufficient to attain the goals of the teaching so perfection or full mastery is not required; just becoming more ethically conscious and continually working towards its perfection will do the trick.

“How can we act today to avoid having to make the choice of violence which is a result of accumulated Aryu?”

Indeed, the more ethically conscious, the more awareness there is to make choices that do not lead to violence but what is violence, shooting someone in the head or stepping on an unsuspecting ant? Both are violence and part of nature though the higher nonviolence is rejecting and being free from the world of time and space which is the field of violence itself. So a person who achieves this is free of violence regardless of their actions on earth. Now this is a very advanced insight into maat philosophy for subsequent courses so we will leave it there. For now this is just some ideas to ponder. And of course, this higher teaching does not negate the lower practice of promoting non-violence in time and space since that is necessary to get to the higher.

“So, how can we recuperate the process of thinking, acting, etc…and be conscious?”

“I listen to the worship tape in the car. Getting to effectively practice is something I am hoping for.”

This, along with the morning program, are some of the most powerful practices one can do to advance the teaching (provided you don’t get distracted while driving!). So continue progressing.