Above: An Anableps’ eye at the water surface. The fish actually has only two eyes, and the four-eyed name “derives from the fact that it divides each pupil into two, one above the water and one below,”

“This is so aptly and eloquently defined as “possessing two eyes,” that of Heru (moon) and Ra (sun). Heru, the Higher self, is a reflection of Ra—the sun that shines and is reflected in the moon. If I understand it correctly this dual consciousness is not the same as thinking in dualistic terms of separation, but rather realizing the Oneness of being in all things which leads to Enlightenment.”

Indeed, the analogy of seeing with dual vision does not mean that there is duality but rather that there is consciousness of the dual from the standpoint of oneness and the appearance of what seems to be dual as being an illusory manifestation of that same oneness. Actually most people are conscious of duality meaning themselves and other things. In terms of Ra the Neterty implies consciousness of Self as ALL and also Self as the appearance of ALL-else, meaning what appears to be dual but is in reality the Self-Ra, manifesting as existence but in differentiated forms that human beings call objects, elements, etc.

“A common mistake comes in believing that the Higher self is the final goal in spiritual aspiration, therefore it is easy to feel good about oneself because of mastering certain disciplines such as tjef Neteru postures, meditation, maintaining a mostly raw vegan diet, etc. While these things are important tools in the spiritual growth journey they are still time and space actions and, therefore, subject to the ego.”

As you have stated it may seem a little confusing to read. The Higher Self is the final goal and the disciplines are a means to an end. So even if there was perfection in any discipline that does not mean the goal has necessarily been reached. There are Yogis in India who can eat metal or go dormant for weeks. Yet are still not considered “enlightened”. So the idea is to move those disciplines towards perfection while preventing complacency. A profound understanding of the wisdom and application of the teaching of Khak-ab will prevent such a possibility. Why? Because khak-ab is a repudiation of not only the ignorance that leads to egoism but the very idea underlying it, that Creation is composed of something other than Ra, in other words, objects that are separate and exist in fact as abiding realities. This means therefore, that everything in Creation that is not seen through as transcendental reality is unacceptable and therefore, our actions also in time and space and the disciplines themselves are also manifestations of Ra. So, the perfection that is concomitant with enlightenment is recognizing that the person doing the disciplines and aware of their performance as well as the performance of them are all Ra. So, until this vision arises nothing can be accepted and in the advanced practice of the teaching there is a ware between Heru and Set and in this war there is no quarter, no surrender, no relenting until Set is put in his place. One of the displays of illusory attainment is pride in any attainment as a be all end all deserving accolades. Another display is pseudo-comfort that comes with positive attainments in terms of the spiritual practices. Therefore, the advanced practitioner is never satisfied and does not accept any part of the world of time and space and just as a person leaves every scintilla of the dreamworld behind upon waking up in the morning, in the same way an aspirant is never satisfied until there is perfect experience of self-as-Ra or in terms of the scripture “rech Ra”. Any comfort with anything less is the manifestation of advanced ego but not full enlightenment. 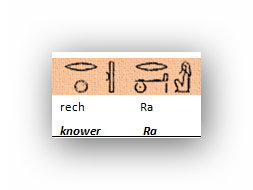 -Teaching of the Temple of Aset verse 117