Udja
I missed this message previously so am answering now.

This is the official recommended supplement list for the Kemetic Diet

EXCERPT FROM THE BOOK KEMETIC DIET by Dr. MUATA ASHBY

IMPORTANT SUPPLEMENTS FOR THE KEMETIC DIET IN MODERN TIMES 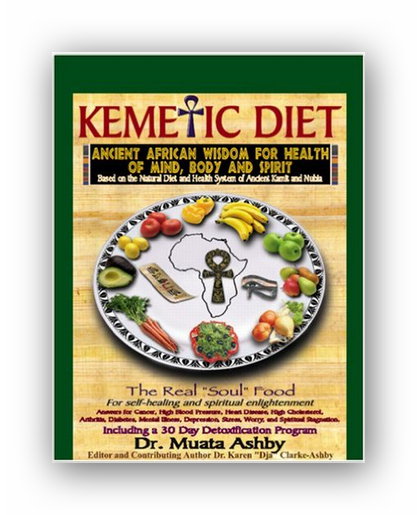 The following supplements are the essential means to insure proper nutrition in modern times. Notice that the term “modern times” is being used here. This refers to the fact that in ancient times the foods available to our ancestors were not denatured, processed, genetically modified or chemicalized. Also, the foods were not produced using farming techniques that render the crops low in vitamins, minerals and enzymes. In fact, the Nile flood left the soil so rich and high in quality that this contributed to extremely vital crops. This is of course not possible in modern Egypt due to the extensive system of dams now used to control and harness the Nile flood for producing electricity.

The following supplements are to be thought of as just that, supplements. The basis of the Kemetic diet is greenery and the best way to achieve this is through fresh vegetables. In modern times it will be necessary to consume organic produce in order to approximate the original high quality of the Kemetic diet. However, after a life of eating cooked, denatured, processed foods, etc. the body may not be able to make full use of even the highest quality organic foods. Some people who go on a raw vegetable and fruit / nut diet sometimes complain of varied symptoms which may include, gas, indigestion, shallow breath, weakness, heart palpitations etc. These symptoms are not to be confused with the symptoms caused by the cleansing action caused by the infusion of higher quality foods.

These symptoms are caused by deficiencies in the essential vitamins, minerals, amino acids and enzymes. Therefore, the first action is to make sure that the diet is balanced with sources of all the amino acids as described earlier in this volume. Even so, for reasons described above, supplements may still be needed for the first two or so years if transitioning to a raw diet. If these symptoms arise or to prevent them one may add the following supplements. Be sure you buy supplements suitable for vegetarians-vegans, and if the supplements are in capsule forms, be sure that the capsules are also vegetable based, and not the usual gelatin based (made from animal hoofs) capsules. Those following this advice have experienced an immediate (i.e. within hours) relief of symptoms, and also a quick buildup of vitality and a deep feeling of health.

Many people moving towards a vegetarian diet experience varied changes in their physiology, as well as their sense of well being, depending on where they are coming from in their previous lives. People who have subsisted on a cooked food diet may initially experience the inability to maintain a high level of energy as they had when on the cooked food diet. This is because the body’s ability to process the higher quality fresh diet has been suppressed for so long that it no longer remembers how to handle fresh foods. Sometimes when people are confronted with the loss of energy they reason that it is because the fresh food diet, cannot provide them with the necessary nutritional elements they need and they make the decision to go back to the cooked food diet and sometimes even further back to the meat based diet. What is actually necessary here is to move forward to a system that will allow the body to receive the nutritional elements. This can be accomplished through green juices. The body may not be able to properly break down the cellulose in the vegetable cells in order to thereby extract the nutritional elements in the vegetables. Juicing vegetables allows the cellulose to be broken down and the nutritional elements (including vitamins and minerals) are made readily available to the body’s digestive system. Green foods are essential to the human diet. The molecules in plant chlorophyll and those of human hemoglobin are essentially the same, differing only in chlorophyll carrying an atom of magnesium whereas the hemoglobin molecule carries an atom of iron. Thus, the consumption of chlorophyll is a natural way to get the solar energy stored in the vegetables into the human body when they are eaten.

Many people emphasize fruit juices in their diets, but this can lead to excess sugar in the body that will lead to the formation of acids, thereby promoting disease. There should be a balance between green and fruit juicing and the kinds of fruits used in the juicing should be non-acid forming. Lemon juice, though apparently acidic metabolizes to an alkaline and promotes the cleansing of the body by flushing out the impurities. Other fruit juices have alkaline properties and should be used accordingly (take at least 1-2 cups per day). Due to the fact that fruit juices tend to be higher in sugar content than vegetables, juicing juices tends to provide a higher concentration of sugars in a smaller serving. This infusion of such concentrated amounts of sugar can lead to acidosis in the body.

Therefore, green juices should be emphasized more than fruit juices in general. Also, fruits tend to be acidic and though the body does require some of the elements provided by the fruits, including the acidity, one should take care to maintain the pH balance of the body. In this manner, one should eat fruits that are in season and not when there is an acid imbalance present, i.e. when there is gas in the gastrointestinal track, mucus, sneezing, cold, etc. At these times, fasting in accordance with the dictates of the body should be allowed, followed by herbal drinks (teas, etc.), green foods and green drinks. Also, the supplements listed here should be taken daily to assist the cleansing process and promote a movement towards balance.

Calcium is a mineral that is essential to the formation of bones and teeth but also the functions of the blood, nerve conduction and also of the proteins which structure the RNA and the DNA, the molecules which direct the vitality and formation of new cells. Calcium deficiency can cause heart palpitations, osteoporosis, tooth decay, muscle twitches, insomnia, arthritis, numbness, and many other problems. Consult your local herbal and vegetable manual for sources of calcium and include a calcium supplement in tablet form to your diet. Calcium should be taken in conjunction with magnesium. Since these two interact normally in the body if one is taken without the other it will cause an imbalance due to a diminished amount of the other.

Coenzyme Q10 is an antioxidant. Some vitamins (C and E) also act as antioxidants. Antioxidants are natural agents that the body produces when it is working properly. When the body carries on its normal chemical processes, these give off stray atoms that combine with others in the body and cause chemical reactions that are not desirable; they oxidize or burn up the body, thus causing many diseases. These stray atoms are called “free radicals.” In a normally functioning body, the antioxidants combine with the free radicals and process them in a beneficial manner. If the nutrient intake is of cooked foods, processed foods, imbalanced diet, stress, exposure to radiation, and toxic chemicals, free radicals build up form and deteriorate the systems of the body. Supplementing the diet with antioxidants has been found to be beneficial in the treatment of cancer, drug abuse, asthma, brain anomalies including alzheimers, aging, MS, periodontal disease, immune system problems, allergies, repair the stomach lining, and other problems.

Coenzyme Q10 is one of the most powerful “Coenzyme Qs.” Other coenzymes are Vitamin C, Vitamin E, Vitamin A, L-Cysteine, L-Glutathione, Selenium, Superoxide Dismutase and Gamma-Linoleic.

Flax is a plant that has blue flowers, and seeds that yield linseed oil. It also has slender stems from which a textile fiber is obtained for clothing. Flax formed an integral part of the Ancient Egyptian diet and in this manner the Ancient Egyptian people received much benefit from receiving the essential fatty acids (EFA) which have in modern times been referred to as Omega fatty acids. Every cell in the body needs EFA. They are necessary for rebuilding and producing new cells. They are not manufactured by the body, and therefore must be taken in through the diet. Thus, a deficiency in EFA will lead to many disorders in the body, and conversely, supplementation with EFA have many beneficial effect of alleviating disease conditions such as arthritis, pain, high cholesterol and trigliceride levels, hardening of the arteries, memory loss, impaired learning, eczema, and heart disease, to name a few.