About your statement: “And these interactions we can see different forms of development between different cultures the development of the dogon and Yoruba happend during the late period during the downfall of kamitic culture between 1000 BCE-0.”

While it is possible that there was interaction between the ancient Kamitans and the Peoples of Mali and Nigeria before the Common Era (CE) there is little evidence. There is more evidence to suggest that there was contact and cultural exchange after 0 CE so between 0-1000 CE.

About your questions:
Q. I live in Macon Ga and it’s about An hour and 45 minutes from Atlanta and I haven’t been able to locate the temple of Amun out there,I called a number I found on the internet but the guy said he doesn’t do this anymore,I believe it’s still open if so can you furnish me with the address so I can commune with those of like mind at least once per month?

Q. I recently purchased the kemetic tree of life poster to meditate on. I noticed that the energy spheres were absent from the poster, is one suppose to draw them onto the picture so as to personalize it and place their energy into the glyph or must you visualize the spheres?

The poster you got was a earlier draft so send your address to receive a correct one. 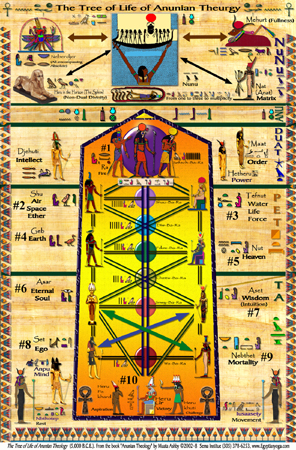 I am not aware of the practice of SP in Congo.

Just as you stated: “”Just because the Yoruba and Kamit have the similarities in systems doesn’t necessarily mean they are the same,… “ Blood contains powerful life forces that are affected by the cosmic forces as they manifest in the beings that use it so the blood of a tiger will contain some tiger energy cosmic force-along with other things. So the logic is to acquire and manipulate that for ritual or occult purposes. Since time and space is illusory those effects and activities are also illusory and are relegated to the lower practice of religion (Myth and ritual) because metaphysical wisdom supplants the need and effect of lower forms of ritual and mythic understandings that ascribe abiding nature to time and space relative reality. So, in the higher practice of religion (Metaphysics) the task is not to manipulate physical realities which are changeable and illusory, may work today but not tomorrow or have unwanted deleterious effects-due to ignorance and or misapplication by the practitioner, but to master mind and manipulate the source from which time and space arises. This is higher power than time and space ritual or mythic belief systems. Indeed, the higher practice of religion involves the concept and principle, imagery and then abstract nature of blood and not the physical blood itself, and then even the intuition about the essence of blood and in fact all elements of Creation so as to understand and transcend them and be free of them. So, as we learn from sage Ab-Amun, an invocation using lower physical artifacts propitiating divinities of time and space will call those energies and with them the distractions of time and space that can influence and distort the mind of the mythic/ritual practitioner of religion especially if not properly led in the practice. In other words, religious worship is a science with three levels and the use of physical items such as blood belong to the earth level; then there is mind level and then soul level. So if there are religions practicing at such levels you can surmise what level they would be related to.

Q. I know that at different times of the day there are planetary forces that radiate upon the earth, my question is is there any mention in the teachings as to which God’s represent each planet ex: Djehuti is the moon, Ra is the sun. Would Hathor be Venus? Asar mercury? Etc.? I ask so as to be able to acknowledge these forces during these times of the day and invoke their presence and reflect on them during these hours of the day. I read in the book Asarian Theology the phases of the moon as they relate to Heru. So I will implement this within my practice as well.

Here is a listing of the main planets recognized by the Ancient Egyptians and the assigned Neteru. Do not forget that though it is true that there is an influence of the planets and stars, since all is connected in the universe, it is also true that the more wise and powerful the mind becomes, the less the influences of external realities and the more influence the mind has on the world of time and space. So this is given for understanding purposes and not as a goal of life to master so as to have power over all matter since it is only possible to have power over matter and influence others to the extent that their aryu (Karma) will allow. Therefore, this is given to understand the influences and thereby be able to recognize them and be free of them so as to get on with the real work of spiritual evolution which is beyond the concerns and capacities of the naive, impressionable, ignorant and infirm. 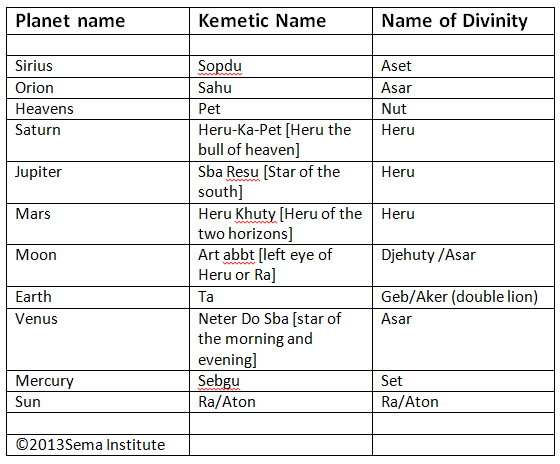