This was a very extensive and descriptive read.

This is a reflective assignment designed to allow the student to reflect on issues of their life and past as well as present work so as to help them take stock of historical issues of life and be able to develop a perspective as well as direction for the near term if not long term direction of life. Therefore, be sure to make a record in your journal for future reference.

About your statement: “I have never felt comfortable with exclusive concepts that made other beliefs inferior or wrong as I always felt there was a connecting thread. As I have been introduced to Shetaut Neter I have seen where all of these religions and philosophies originated, and it makes sense now to see the origin of the ideas and practices.
I think it is important to continuously explore and contemplate the knowledge as this helps to deepen the understanding and imbue the mind with these thoughts. This then impacts on the feeling nature and helps with inner transformation, which expresses in outward life so it does not just remain just at the level of knowledge” 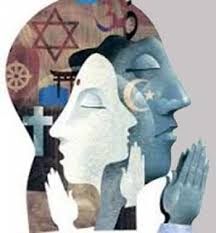 The honest search for spiritual meaning

As a person who studied many spiritual paths including the Neterian, before concentrating on it I am also familiar with the ideas of universality and commonality both as an wishful ideal as well as a practical expression of human spirituality capacity. From a historical perspective it is interesting and at first disconcerting to realize that the diversity of spiritual traditions in the current day was not present in the past and has arisen along with the emergence of societies worldwide. Of course there is such a thing as an honest search for spiritual meaning but the trouble is that most on that quest are searching as if in a a car driving along a dark road with no lights, with blindfold, dozens of people talking and everybody bumping into each other, sometimes crashing and at other times ending up stuck in a ditch and feeling good about it because all the loved ones and friends are there too; what an image! 🙂 This is a spiritual search characterized by the predicaments of egoism, ignorance, and the blind leading the blind. Those societies, that gave rise to the present day religions, for the most part developed those traditions, to their current state of spiritual manifestation, while being removed from their source and also, in many cases, heavily influenced by their “societal philosophy” (see book Comparative Mythology by Muata Ashby) which in the case of western culture was a self-serving ideal to create religion that would not only approve of but support capitalism and exploitation of the masses. This phenomenon is due to lack of wise and ethical leadership and to the lower human needs for self-identity approval, self-esteem, comfort and survival, served by the capacity to forge segregationist thought processes that disconnect from the other and from nature and cognitive constructs, which -due to ignorance, greed, fear, delusions, etc. often include cognitive dissonance (since otherwise they cannot work) to both explain and understand the world around them and then rationalize their place in it at the exclusion of the world itself. From a historical perspective and I think empirical one, the spirituality of the distant past would seem to have been more complete, wholistic and advanced as well as environmentally sustainable as opposed to the more faith-based or dogma-based forms of the present that seem to serve the present pathological needs of human beings and the seemingly insatiable greed of human societies that would seem to have, lost the capacity to act with rationality even where it concerns the safety and well-being of itself. The capacity for self-delusion, personal selfish interest and caring for what is here now and not for what may be here tomorrow, which may be seen as the other side of the coin of the human capacity to act with ethical conscience, wisdom and enlightenment, is a factor in the inability to move towards what is nefer (good). 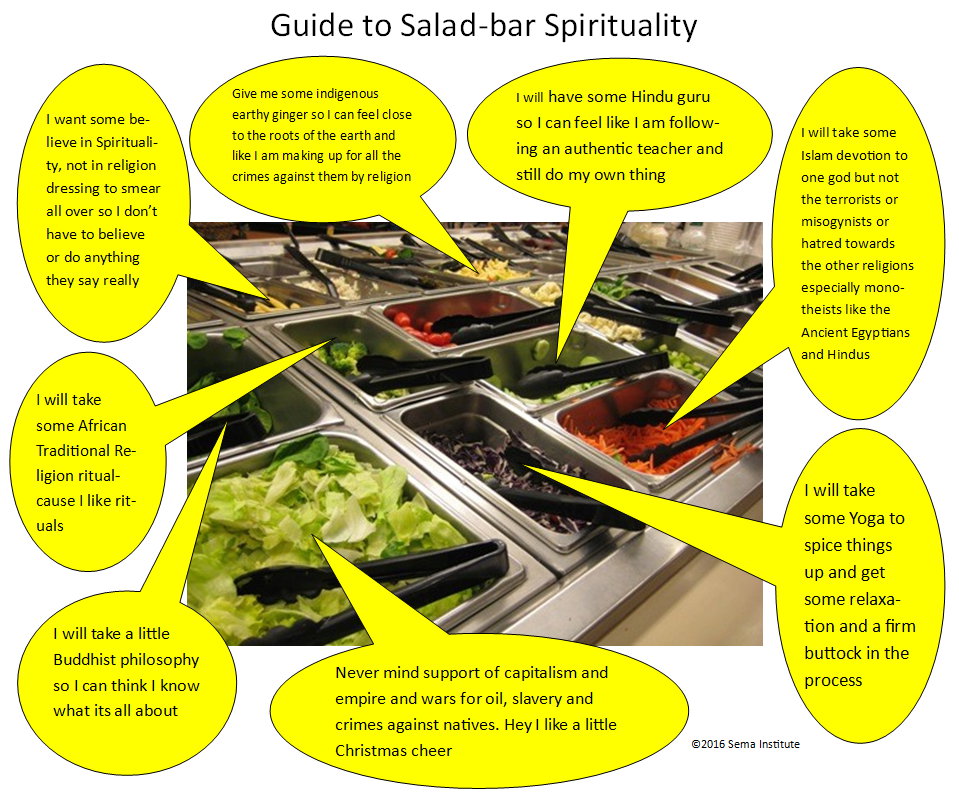 Connecting threads do not necessarily mean that all religions connected by such a thread are either authentic or viable. Based on the aforementioned issues of human social psychopathologies, even if there were a capacity to recognize the deficiencies in one’s own religion and a benefit to following a thread to another, that path would be and is most often rejected by the conditioned mind bent on a prescribed course set for it by its upbringing; which can be conditioning towards a theistic path, a atheistic path or anything in between. So even if there were a path to an authentic and viable path, no matter how many threads there may be connecting the given religions, most people following the religion of their birth or early indoctrination, or the emergent confused aryu (karma) of the past, thinking any of these as their own ideas or inclinations (intuitions) will likely follow the beat of their own drummer and either follow a self-directed path with a hybrid (salad-bar spirituality) or not follow that thread to its source, which could potentially lead to shattering long-held personal beliefs even if it would potentially lead to the qualitative improvement of their present spiritual path; this would have the net effect of leaving them with a different version of the same flawed path they thought they were moving away from, a partial-religious tradition without all the levels of practice or a confused admixture that leads in circles instead of vertically to the desired goal. Even though such present day paths may have originated in a authentic and full tradition, over time, political disruption, social chaos, war, loss of authentic leaders, etc. they for the most part may have acclimated to foreign geographies, customs or politics and/or lost the full capacity and fell into dogma, partial religion or outright manipulation by religious or political demagogues. This is a sobering thought and reflection on the far reaching consequences of societies that have become disconnected from their source even while retaining rituals or tenets, whose deeper wisdom has been forgotten, or societies developing on their own, with its ignorant populace with compelling, though misled myths or self-serving leaders and the consequences, both for humanity and the ecology, that can come to fruition hundreds or even thousands of years henceforth. So in these times of faith-based limitation, personal delusion, political intrigue, etc. it is up to the individual soul to lead itself to itself by means of whatever truth it can find in the world and which the mind can allow itself to follow.

About your statement: “I was painting by a river one day and I must have become really deeply absorbed as something shifted and I heard the river whispering and laughing. Later that day I was standing outside of a bookstore and found myself for some reason staring at a book through the window. ‘Walden Pond’ by Henry David Thoreau. I went in and started looking through the book and came to a section where Thoreau had experienced something similar living by the pond.

I bought the book, so in this way different ideas and ways of thinking were being more impressed on me.”

While doing work for a masters thesis I had the opportunity to review the work of Thoreau and though I feel he was able to reach elevated states of perception and awareness and though I do point to him as an example of human capacity, ethical conscience and spiritual awareness, I would not consider him as a typical or workable example for a society mired in social narcissism, pathological personal codependency, spiritual ignorance and fatal political corruption. Many people in this society are so bereft of spiritual sustenance that they cling to makeshift practices to achieve any sort of relief that may offer even temporary respite from the pressure of spiritual loss which they cannot understand or express but nevertheless experience day to day. Perhaps this plays into what Thoreau called “lives of quiet desperation”. Since the churches and mosques and temples and even some New Age, African, Indian and Native traditions, etc. cannot satisfy the needs of their societies, those people seek out fulfillment through orthodoxy in an effort to drown out the fears of life, uncertainty of faith – requiring the eradication of everyone who may contradict that faith; they may seek out secular entertainments like concussion factory football to satiate the need for distractions from the dullness of life; they may engage in living vicariously through progeny instead of facing the banality of their own misguided lives or in the adulation of Hollywood or Political idols even if that adulation supports the dysfunctional behaviors of those people, which is in turn seen as a support of mass delusion and dysfunction – so one big happy family of dysfunction in which the TV reflects and emulates the Mal-adaptations and dysfunctions of the masses who emulate the degraded cult of personality of the TV – all in all an insane society just on that basis, let alone the medicated and self medicated drugs used by the majority of the population and we have not only a diseased society but a suicidal one. Even more than that, it is a society of murder suicide as it is taking a countless number of species with it.

“It takes a strong disciple to rule over the mountainous thoughts and constantly go to the essence of the meaning; as mental complexity increases, thus will the depth of your decadence and challenge both be revealed.”

Nevertheless, like Thoreau, many people, not having authentic religion or religious leadership, seek out distraction or stress relief where they can find it; distraction in the form of entertainments or having relationships and children or relief through drugs and alcohol; but for those who are less inclined but still unable to engage in serious introspection and intensive authentic spiritual practice, then activities that offer a temporary reprieve from the hounding cacophony of their own minds, through golf or fishing, camping, nature walks, and similar. For others who need more action then it is extreme sports acting and/or participating. 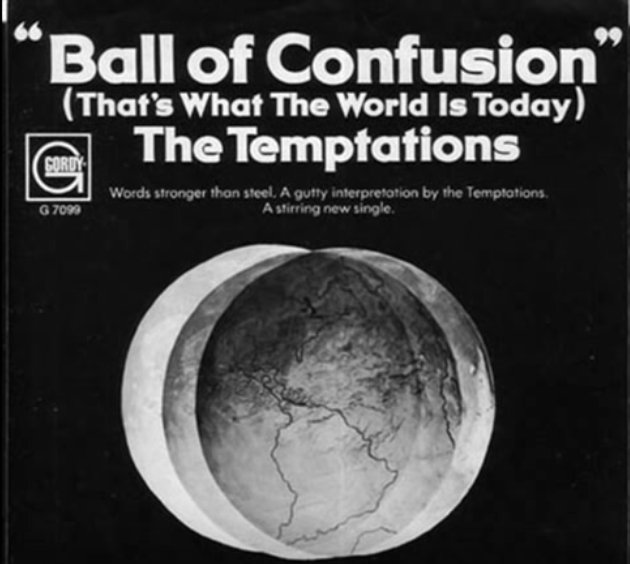 The bottom line is the same though, paths that distract and or partially relieve until the next fix is required. The ideal of a spiritual aspirant is indeed to search and then vet a path to follow; To the extent of the maturity, to that extent, the path will be qualitative and the capacity to follow it will be equally determined. In the midst of a whirlwind of chaos, termed “Ball of Confusion” by the group called “The Temptations”, that is a tall order indeed for any soul; yet regardless of the distractions and many lifetimes that may be required, we may take solace in the fact that even if it takes forever to reach an authentic way and the capacity to seriously engage such a path, that is still less than the time of eternity.