In reading your posts I am struck by a feature I noticed in myself over the years and how I live the teaching and also something I began to notice at the 2014 Tjef Neteru Level 2 conference, the immersion in the teaching to such a degree that the mythic wisdom becomes part of the language and then the next step is for it to become the vehicle of the thought process. One who thinks in mythic terms, about Asar as the soul and Aset as intuition and intellect, etc, etc, and lives the life of Heru and seeing their iniquities as Set and calling for the Boat of Ra for salvation from the spirit….. all that wonder is transformative in a dynamic and powerful way and lifts one from the vicissitudes of modern culture and public ignorance. so bravo!

So when as you say: “Asar reminds that if justice (Maat) is not recognized He will send forth demons. If the demons are not enough, Asar reminds that He is the King of the dead and that they, meaning Gods and Goddesses, will themselves die someday and come before Him in judgment. Gods and Goddesses are metaphors of the Cosmos and will all dissolve back into Creation (the Nu).” and “We have witnessed the re-memberment (Resurrection) of the Soul by Aset (Intuitional Wisdom) who gives birth to Heru (Higher self). We have seen how Set (ego) plotted and killed Heru, and how the outcry of Aset stopped Creation and allowed Djehuty to Resurrect Heru. This allowed Heru to grow under the Spiritual Preceptor Aset, His Mother, to become the vindicator of the Soul (Asar), which brings us to the battle between Heru and Set (the struggle within). ”

When we hear such a thing as this threat from Asar it is allegorical language meaning that it is the discovery and alliance with our own soul, instead of the ego, that allows us to unequivocally tell the neteru they better behave “or else!” and thus we become kings and queens in the kingdom of our own astral existence and then also in our physical reality with the installation of Heru on the throne of our personality. Thus Asar, our soul is resurrected by Aset (our intuitional wisdom), that has been freed by Djehuty (our lucid intellect) and redeemed by Heru (our victorious spiritual aspiration). When we use the Kemetic-Neterian neteru personality profiles as psychospiritual metaphors of our own psychomythic personal outlook and self identity then there ensues a dynamic movement process towards enlightenment.

On your statement: “All human beings are faced with this struggle but few understand the true nature of the struggle. It has been simplified as the struggle between “good and evil,” and these two forces exist outside of one’s self. In most orthodox religions the personification of good and evil comes in the form of God and the devil, and human beings are subject to manipulation by the “devil” if they don’t follow the will of God. Therefore, if they “sin” on one day they can be absolved of the “sin” on the next day by asking God for forgiveness. This can develop into a cycle of behavior that only leads to pain and suffering and, possibly, loss of faith, as most orthodox religions are faith based.”

When I read this statement from you I thought of a character from back in the day: Flip Wilson 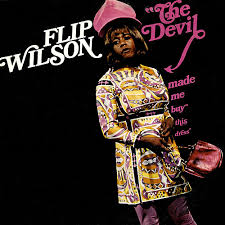 On your statement: “We create our own “hellish” conditions in this lifetime and the next from accumulated ariu.
In the lecture it speaks of Djehuty (Divine intellect) writing a letter to Asar asking Him what to do about the indecision among the Company of Gods and Goddesses in the battle between Heru and Set. “Asar reminds that if justice (Maat) is not recognized He will send forth demons.” These “demons” spoken of are not the demons of Dante’s Inferno, but demons of our own making that come in the form of depression and despair that can lead to self-medication such as alcohol and drug abuse, etc., which may lead to suicide etc., etc. In any case it is a high price to pay for ignorance.” 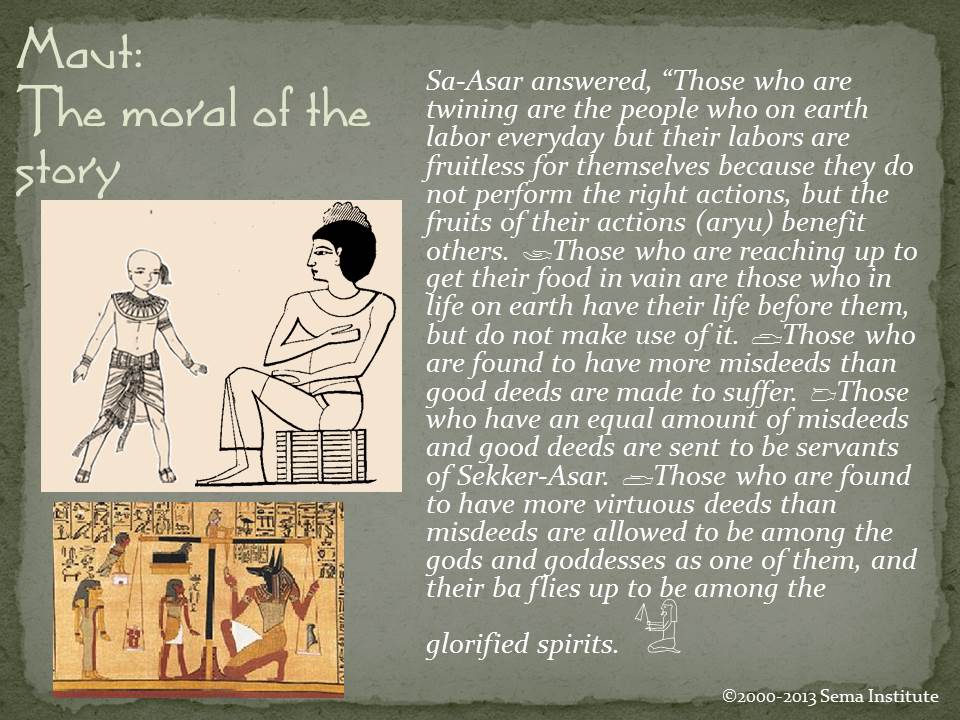 This idea of our own creation of our own condition is key to discovering freedom because it is in our own power to create our own existence and to the extent we have conscious awareness of that and then secondly, the capacity to wield the power of our own existence (owing to the clarity or opacity of aryu), to that extent we are either are slaves to the neteru or are masters over them. This means the difference between having Set as king over our personality or Heru, the difference between the redemption of the soul or the degradation and suffering as described in the teaching of Sa Asar and the scales of Maat, the fate of an unrighteous human being. If there is any area where the idea of personal responsibility applies is in this context of the spiritual journey. This personal responsibility requires courage, perseverance and dispassion. Otherwise, the alternative is groveling and begging for salvation instead of working for and demanding and commanding it. This point is to be firmly planted in the mind and thus also to be acted upon, lived and executed through constant and perennial shedy.

On your statement: “As an aspirant of Shetaut Neter I have chosen the Divine self over the ego. Having said that, I realize that I am in for the battle of a lifetime.”

I think the best response to this statement about the struggle is not from Sebai MAA but from the teaching directly:

“What is the source of sadness, but feebleness of the mind? What gives it power but the want of reason? Rouse yourself to the combat, and it quits the field before you strike.”