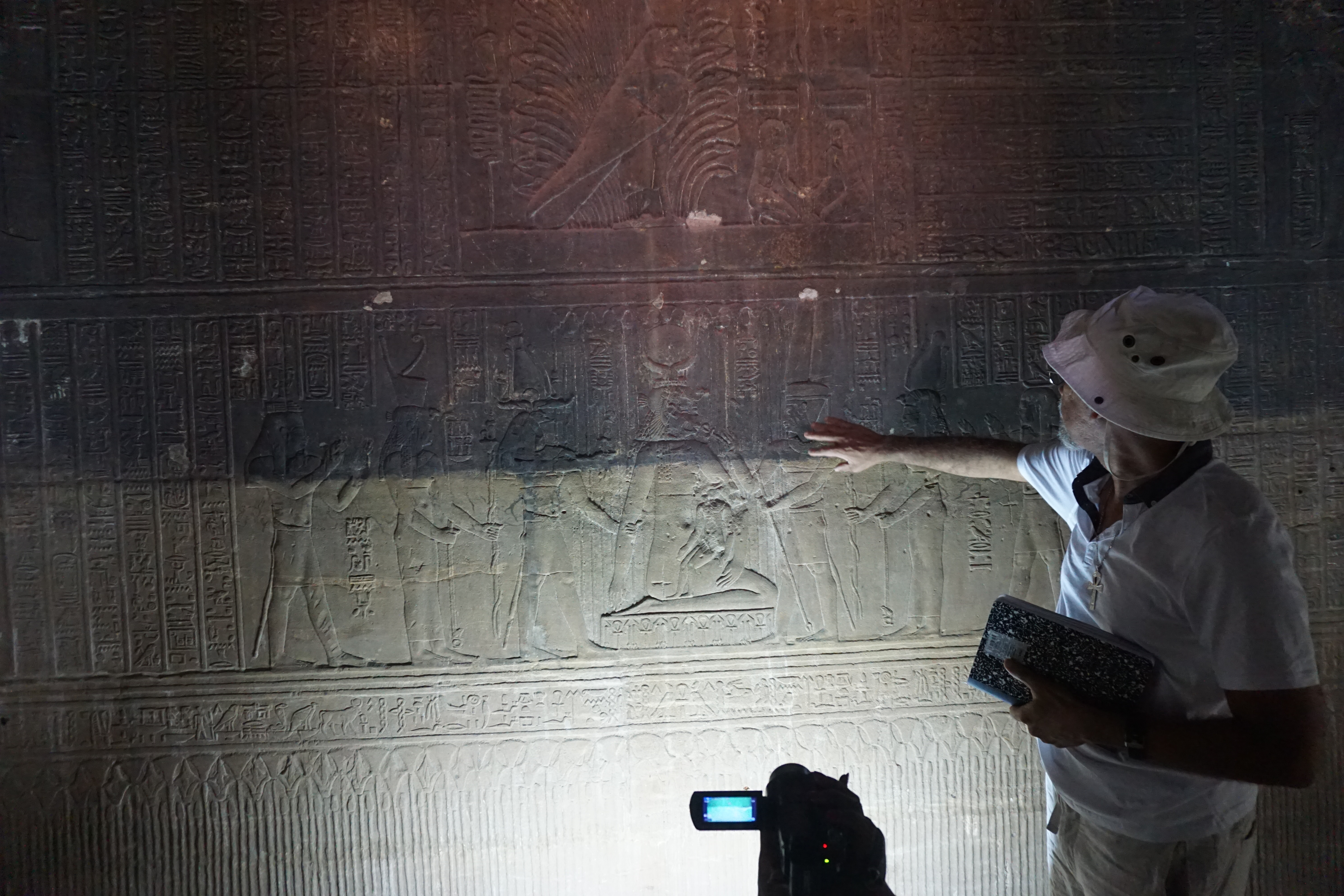 Image from the Birthhouse of the Temple of Aset Depicting the Birth of Heru i.e. how the spiritual aspiration dawns in the personality and which neteru or cosmic forces are involved in that process

On the statement: “Nursing of the breast is symbolic of being initiated by Aset. “

It is worthwhile reiterating that the initiatic process is a process and that the nursing also relates to drinking or imbibing what the goddess offers -over time, i.e. wisdom teaching. However, a wisdom teaching does not impart wisdom but rather knowledge needed for wisdom; the wisdom comes through application and experience later or if there is aryu of experience from the past then the knowledge can connect to that and produce instant wisdom like when a light bulb lights up and a person says “aha!, I got it!” – just by hearing. If that is not the case then there needs to be work sedjem (hearing and acting) to develop the wisdom.

On the statement: “Why couldn’t Aset revive Heru?, one might ask. Sebai Maa explained that it was Aset’s stopping Creation with Her cry that actually revived Heru through Djehuty. “

Indeed Aset was the causer of the final salvation but not directly. Intuitional wisdom is not the direct cause of enlivening Heru or the aspiration and enlightened personality. Intuition contacts the spirit and the essence of spirit enacts the enlivening/enlightening through the intellect. Aset can revive other beings but this aspect (Heru) required more direct touch from spirit. So Aset (Intuitional wisdom) is the cause of enlightenment but through certain means. She reconstitutes and revives the soul (Asar) awareness of spiritual nature within that is beyond ego (Set) that marries spirit with intuition and gives birth to aspiration and desire for redeeming the soul (leading it to be king of the Netherworld) in the first place. So developing intuitional wisdom is a process that begins with dispassion for the world and turning towards spirit. When Aset discovered the name of Ra her wisdom became full but that needs to be imparted to Heru and the fullness cannot be imparted in its full state, since Heru was not ready to hear and say aha! I got it!, but rather in segments or stages of gradual spiritual progress and this is the process depicted through the Asarian Resurrection myth. Otherwise, if Heru just said aha! then the myth ends there and the points would be lost for us ignorant souls.

Additionally, on the statement: “This “cry” of Aset is the kind of cry when your utterance of the words of power become so perfect that it shifts your consciousness in a way that turns away from Creation—Creation stops—you transcend Creation.”

The “cry” is more of a “cry out” or calling to spirit, turning to spirit in such a way that there is captivation of spirit or the spirit nature in a manner that blocks out all else i.e. stops other processes of awareness and concern except for the singular object of attention.

This is an interesting and apt observation: “We are also the ego (Set) who, at the time of Heru’s birth, is fully grown and far stronger than an infant, thus he has no intention of giving up without a struggle. “

Indeed, the personality starts out the spiritual journey in a state governed by Set but wherein there is a little revolt in terms of Khak-ab, a few residents of the governate are upset and want to change the system but without power until Aset gives birth to a spark of real wisdom amongst them, a savior, and that grows the intellect and vitality to the point of challenging Set and eventually defeating him. In this analogy the residents are errant maatian thoughts and feelings in a sea of unrighteous thoughts and feelings. But they persist and their suffering causes them to turn their devotion to Aset even as other parts still worship Set. Part of the personality desiring truth and the others to continue enjoying egoistic pleasures. A certain amount of dispassion and detachment grows to the stage of seeking wisdom and the nature of the soul even in an ignorant and passionate personality. The righteous part give birth to Heru and there begins the battle for control of the personality (the kingdom of two lands with control over physical desires and actions and over divine intuitional awareness. And we know who wins in the end!

On the statement: ” In the perfect stillness of Meditation one ultimately becomes unaware of themselves and “just becomes part of awareness.” It is in this state that the realization of the world as spirit occurs and one becomes Enlightened (Akhu).”

Lets remember that the defining characteristic of physical Creation is the factor of “movement” -imposed on part of Nun by Ra, and this is what distinguishes its nature as opposed to the Nun or primeval state which is characterized by menu (or mennu) “inactivity” as explained in the scripture of Anunian Creation Myth. 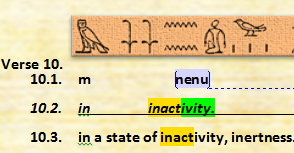 This “inactivity” or “stillness” is the underlying nature below the level of activity called Creation -so if a person can slip below the activity and mayhem of life and the ignorance and desire to hold on to Creation, ones human existence, children, career, desire to save the world, etc. THEN the inactivity level can be RE-discovered and experienced. This stillness or inactivity is not only to be experienced in meditation but as an actual state upon which the activity is apparently superimposed-as a reflection of spirit matter (neteru) (reflection of the inactive spirit). When IT is experienced enough and with sufficient fullness of clarity, purity and freedom from mental complexes and with powerful dispassion and detachment – well you know what happens next!