A very very very extensive post and I am glad you were able to find your way through the site to be able to participate.

There are many things to comment on and you had a inquiry so lets get started.

You mentioned the term “iterative” several times and I think this is an apt term to use to describe the process and the necessary manner of practice that is enjoined. This term “antet begag” covers this issue, meaning relentless. This is a key to the practice though it is not the only necessary feature of the character of an aspirant that is necessary for success. Nevertheless it is an essential ingredient and it is also a key even in worldly success.Therefore it is an important issue that is sometimes affected by khemn or ignorance, which can cause frustration and stagnation in the practice which then becomes dull and non-productive. Your personal challenges are certainly evidence of the benefit of iteration to work through the issues but the other ingredient as you have stated later, is preceptorship. 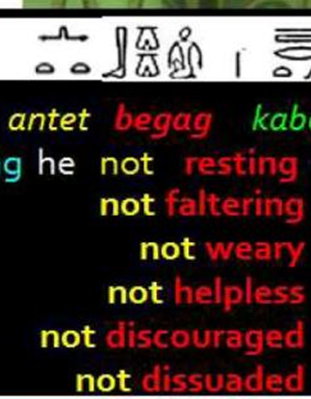 I think also that this statement was important: “The formal meditation (Will Path) has always been my most successful path along with selfless service (Action Path). I have neglected some aspects of yoga of righteousness action in particularly the area of diet.”

The point here is that one can have “success” in a particular area of sema “yoga” but that success is usually only judged in terms of practical execution while not considering effectiveness. So a person can meditate 10 hours per day and reach high levels including anrutef plane – but yet still not attain enlightenment thereby. Why is this? Because there are aspects of the personality that are “corrupted” still “distorted” in terms of being harmonized and or “balanced” (in a maatian context). So even with indomitable will if there is lacking clarity or ethical purity or degraded feelings, the movement is thwarted. Those elements of the personality that are out of alignment, that contain psychological issues that are distorting the personality (ego [aryu]) can be anything from remaining long held beliefs to ethical diminish-ment, to childhood traumas or traumas from previous lives or diffidence about some area of the philosophy. So the more advancement, the more subtle the plane visited, then the more subtle also are the obstacles in the unconscious mind and also the more powerful. So the digging up process of the spiritual practice goes deeper and can reveal bigger issues to be resolved, without which the progress does not occur.

On your next statement: “Moreover, I had an addiction for Krispy crème donut, cheese, eggs and potato chips. The Krispy crème struggle is real. Additionally, my daughter has become a good cook and makes a macaroni and cheese that will make a vegan change their mind about eliminating dairy from their diet even if it is for one day. Furthermore, I ignored the warning signs from my naturopathic and allopath doctors for over 10 years. I don’t think that GOD is going to allow me to continue to ignore given by these wise people for much longer without suffering dire consequences for my ignorance’s ( lack of making use of wisdom) and weaknesses ( weakest virtue).”

Wow! After all these years and you still like that “mac-n-cheeze”! This demonstrates the power of negative aryu that has gained power in the mind. And consider also the derivative aryu as manifested in the extension of your self: your daughter, who, even if you defeat the setian desires for Krispy crème donut, cheese, eggs and potato chips – then you still have to deal with the other aryu you yourself created by extension in the form of a daughter relationship that will continue to entice, beguile and delight your senses, and ego as parent, human being, individual and man. Phew! Now I see why the sages caution about such things! Finally, the struggle is as real as the power of the negative aryu – without that there is no reality and the world has no power.

Nevertheless – joking aside, these are issues to be confronted and especially as you get older the weight issue and the quality of diet issue are of extreme importance and it behooves instructing your daughter that she is killing you -maybe lovingly or ignorantly or maybe softly like the Roberta Flack song, but still- killing you little by little as well as herself and her own children if she has or will have any. And for you, this can be several sources of subtle obstacle we discussed earlier so for that reason alone it is worth confronting this issue. The choice is gain the Krispy crème & mac-n-cheeze or gain eternity of nehast. Hmmmmmmm? Wonder which is the best choice here?

About your statements: “Truthfully prior to the 2013 conference, I got discouraged because I thought that I had maxed out on progress or even worse I thought that I was not worthy of such a divine path.” and “My belief is that I did not notice it because I was not reflective of the path of devotion or the integral yoga process during the periods of dullness and agitation of my mind.”

This points to the benefit of preceptorship. I remember that year and we had some intensive and detailed discussions and you made some breakthroughs and it is important to understand that the prior years were not wasted but you also needed to expend some aryu by spinning the hamster wheel a little -since you also had some other concerns like professional advancement and academic studies and such. All that was part of your fate and as always the present is about deciding your destiny and therefore the past does not matter unless it is an obstruction for now and any issues are to be confronted and hen moved on from to the matters at hand, without regrets or recriminations.

About the statement: “At this point, I have a clear understanding of how to practice the wisdom meditation. I have ignored the practice for years. However, I started to practice it intensely in 2013 after the winter conference and have continued the practice up to point.”

The initiatic practice is one of continuous refinement so clarity is progressive. Also, I would not use the word ignored but rather working though stagnating issues is perhaps a better description. And 2013 can be seen as a re-energizing jump start.

About the statement: “I am now gaining a clearer understanding of how to practice devotional love via the wisdom of ISIS meditation. As a result, I am gradually experiencing a higher level of peace. I noticed especially in the past two months that regardless of what I am doing I feel peaceful even when I have to deal with difficult situations. “

It is good to know if the progress and I think after the 2015 Conference you have even more to work with on the Aset Meditation system and that is not all -for the presentation was maybe a quarter of what is there, but best to be taught in a classroom setting as opposed to a presentation setting.

About the statement: “One of the milestones that have been reached is when I practice advanced formal meditation I no longer have to take one and a half hours to experience an ecstasy.”

The improvement in the time to reach a highly concentrated and serene level does shorten with practice and keeping in mind that the other elements also need to be in place-as discussed earlier- then when all is in sync then there can be properly balanced, integrated movement towards the goal. The term “ecstasy” can mean many things. In terms of the levels of experience there are, among others, awet ab (expanding joy) and hetep (union-cancellation of opposites – at which stage there are no more dual concepts and ecstasy is a concept existing in terms of time and space duality as we can find its opposite in agony, depression, misery etc. Keeping in mind that the goal of nehast is neither quantifiable nor quantifiable it can be alluded to in terms of allegory and metaphor and philosophical abstraction but the goal itself is beyond any circumscription—this explanation now is just an idea of what we are talking about so as not to hang on to any words that might become obstructing concepts for the advancing practitioner.

On the statement: “I could use some more discourse on how to practice ritual of identification via the Asarian Resurrection as a wisdom meditations technique.”

This is a vast area of study and would require more of a course and not just a post as part of a larger discourse on other subjects. Suffice for now to say it is discussed in the Pertmheru and Here I cite one of the pages from the book. The ritual of identification is part of a meditative practice we refer to as “Nuk pu” or “Nuk pu Nuk” meaning “I Am” or “I Am that I am” -which is likely where the bible gets “I am that I am” – see below: Table 9: Essential “I Am” Formulas from the Prt m Hru. It is a process of stating, feeling and dissolving into the higher self and relinquishing the ego reflection of the higher self and thereby assume the true identity. As applied in the Aset Meditation it would be “Nuk Pu Ra” and “Nuk Pu Neter” 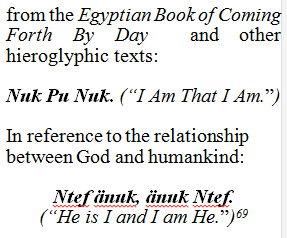 About the statement: “Whereas I find it easier to practice and reflect on the wisdom teaching when there are less intense distractions.”

This is certainly true especially for the beginner and intermediate practice. In advanced practice the world is not only intellectually seen as an illusion but experienced as it is (neteru) which is part of oneself and yet like a dream illusory (or as the Aset and Ra scripture teaching refers to it: “reflections” of Ra-the spirit) and temporary, so therefore at some point it becomes “irrelevant” not in a practical sense but a philosophical psychological sense and it can therefore be ignored and one can slip into meditation regardless of the circumstance. So in the beginning it is proper and recommended to find peace and quiet and ultimately that too is to be outgrown. This may be seen as attaining mastery over the neteru (elements and forces operating in Creation.) 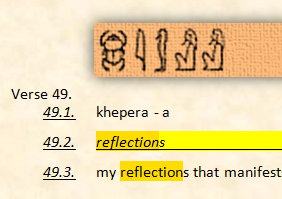 Finally, on the statement: “There are still struggles (food, righteous speech) but I concur and harmonize with the teachings.”

It is important to realize that the path is treacherous and full of disasters at every turn but which have been created by our own misconceived notions and desires. If, therefore we work to purify the heart through maat (ethical conscience), purify feelings with uashu (devotion) and mind with rech (wisdom) then we can clear the delusions causing the faulty steps in life. This does not mean that even for sages there are no troubles. It means that there is reduction of missteps and regardless, the goal is reachable.