You have a way of methodically going through the myths and interweaving the mauts throughout as you go along and is very relaxing to go through. Just a few points.

On the statement: “Hetheru (the Right eye of Ra repaired by Djehuti) comes to the rescue of Heru by repairing His Right eye (the power of the Sun) with goat’s milk and Her spit. “

I think you understand this point but it did not come across to me in the writing. Just to clarify for all reading this (And everyone should know from the presentation): Djehuty cures the left eye, the eye of mind, the moon, the intellect. Hetheru cures the right eye, the eye of fire and the sun. Together the power of the two eyes constitute whole and unitary consciousness and power as opposed to just intellect or just raw power which is not Maat and leads to imbalance and delusions, vulnerability and egoisms.

“The myth tells us that Heru did not defeat Set until He became All encompassing. At what point in the Asarian Mysteries did Heru become All encompassing? There seems to be a gap between Heru fiercely battling Set to Heru the Winged Sun Disk (Heru Behudet). I would like to be directed to the specific acts that brought about Heru’s All encompassing state of being in the myth of Asar, Aset and Heru.”

Enlightenment occurs in degrees so it is not an event as much as a process or we can say that it is an event arrived at through a process. Part of the process was the early schooling by Aset (early years of childhood and adolescence as initiate) and another part the rebuff from Ra (reminiscent of Ra’s rebuff of Aset) then the struggle of the challenges in battle which were many, which included dejection; however, he rose above that (Antet begag) and then relentlessly challenged Set (ego) to a draw. The battle of life when done with ignorance, is a parade of suffering and endless frustrations, marked with intermittent pleasures sufficient to cause one to keep seeking as if running after the mirage of abiding happiness that is never to be found. At this point (a draw) there needs to be more than one can muster by one’s own wits and thus it is necessary to have divine grace and that was in the form of spirit coming to the assistance in the forms of Aset (who was helping all along) and Djehuty and Hetheru who repaired his spiritual and physical vision. At the end Heru received the acknowledgement and assistance from Goddess Net, a higher form of Aset, whose final indignant and uncompromising determination reached as far as the abode of Asar (the soul of all souls [innermost reality of all individual souls]). 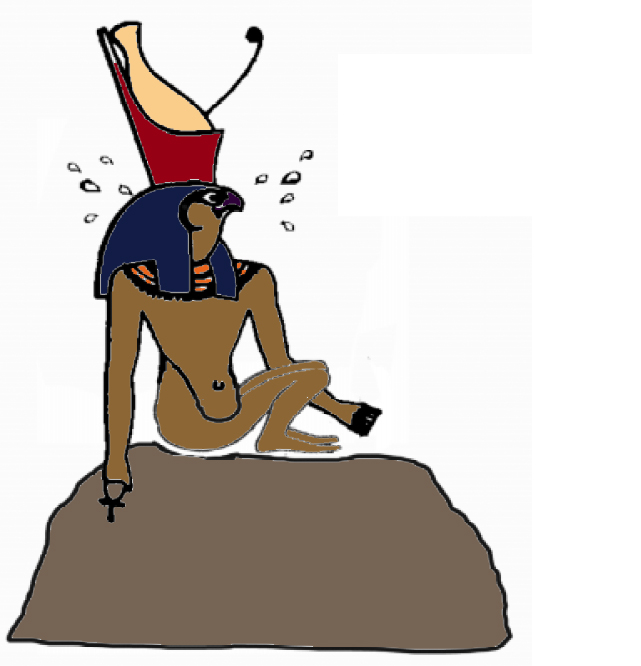 In this context, Net who is the supreme and all-encompassing divinity (comparable with Neberdjer), is the connection with the higher self within that is supremely dignified and regal and her call reaches the innermost reality of the soul, which is awakened to that higher reality and qualities abiding in her, and within each individual. So all of this process, including the incompetence of the other gods and goddesses, all of it, is a process guiding the heart (mind) and soul (artificially individuated spirit) through a struggle in the wilderness of Ta, Pet, Duat (time and space), leading it to, at each step, expand into and discover its true higher self. Heru’s relentless fight earned him respect but his attainment of the healed eyes and the recognition/connection to Net and reception of righteous benediction (maatian blessing) from supreme spirit (Net) and fully empowered soul (Asar) [a soul fully empowered an aware of its own nature as universal spirit and not individuated limited being] earned him recognition as Ur Uadjit [winged disk-all encompassing and eternal sun (spirit) with single dual serpents].

The maatian blessing from goddess Net is the fruit of righteous living, ethical conscience in a life based on truth. Her coming to the aspirant and recognizing him was one hing and then the moment she wrote her letter to Asar, on his behalf, (meaning his connection in the supreme spirit called out in supreme proclamation-to all including the innermost aspect of the individual soul which is supreme spirit [meaning there is no individuation left anymore-just supreme awareness and power which vanquishes all iniquity (set) in the heart) really, at that point the deal is done and the rest is formality. He earned the spirit vision and his wings (enlightenment) and the struggle was a venue to allow the process to occur. His actions verified his determination and his virtue, initiatic wisdom and honor throughout were also proofs of his attainment. The final acknowledgements were also recognition of that. Of course these are aspects of one’s own personality, as explained by the sages in terms of personalities and conceptualized zoomorphic and anthropomorphic forms couched in a plot whose theme is the redemption of the soul and the reinstalation of it in its rightful place while doing the same to the ego and in this way effecting the pert (going forth) movement into Heru (light) which is the goal of life.