I was thinking more on the topic of New Age spiritualism. At times its a difficult phenomena to understand because sometimes individuals or groups may be on a path to something thats whole and more guided, but in the mass of people it stays rooted in materialism and consumerism of the West. One person I have learned from is Tenzin Palmo an English women who followed the guidence of her teacher for over a decade in retreat and now she has created a monastic temple for female nuns with the goal to Retrain women to be Yogini, which in Tibet the female Yoginis were broken up and dissolved and lost for awhile. So this would be a case of someone who maybe could have got stuck in New Ageism if she did not get access to authentic teacher, but after getting proper instruction can make the real teaching more available to possible other groups (women, westerners, etc.)

The issues that she brings up in this video is in a sense a desire to correct the inadequacys in the spiritual institutions in the west that almost lend themselves to New Ageist interpretations or goals. For example as she mentions misunderstanding of going beyond worldiness, lack of available teacher student relationship, lack of support. 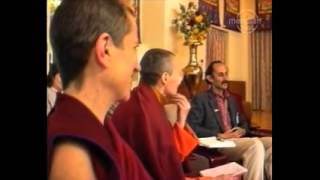