[Note -Overview: this current post is ongoing to 2 previous posts #5434 amd #5432. Re: Several years ago I viewed a documentary on the Tibetan spiritual tradition in which Monks took young boys into the monastery that were struck, using a metal rod with their monastic seal, between the eyes at the point of the Ureaus. The blow was so hard as to leave the imprint of the seal on the forehead of the young boys, thus forcing open the energy center with the intention of instant enlightenment. After this the boys were never allowed to leave the shelter of the monastery into the mundane world or insanity would ensue.]

Let me say that I give all respect due to the Buddhist Tradition which mirrors Kemetic Sema Tawi and I try not to make judgements about ritual practices that I do not feel qualified to understand, but I was a bit uncomfortable with what seemed to be out of character in the peaceful Buddhist Tradition.

Ny…this is an understandable approach.

You mentioned it seemed out of character and made you feel uncomfortable – but you feel you were not qualified to understand the ritual.

I would suggest that your feelings of discomfort and out of character was your qualification for understanding what you needed to understand…that something is not correct.

There is little “sane” narrative out there in western culture as to what is “authentic spiritual/mystical” practice – to counter the “crazy” stuff…that many go along with and even believe it is so “mystical” or “wonderful”…much like the parable of the robber putting his hand into the wall of an old Temple looking for jewels and gold, only to be stung by a scorpion, but being afraid to show his true pain, pulls his hand out and says, that was interesting…you should try it. Each robber followed and not wanting to be the weak one by speaking the truth about the pain of being stung…kept saying it was wonderful or interesting…mistaking what is wrong and painful for something meaningful and wonderful.

This is common in society and is one of the “problems” and dangers for aspirants who don’t have knowledge of authentic spiritual paths – and “suspend” their judgement about an organization or practice — and follow blindly, and end up in a cult that tells them to drink poisonous cool aid so they can transcend to a higher reality…and they follow blindly, believing it is true mysticism and spirituality.

When aspirants enter into “spiritual” practices or traditions, it’s a vulnerable time…many are desperate to turn their lives over to Spirit, and many are easily manipulated by well meaning but non authentic traditions and paths and persons, and also charlatans (who are deliberately out to defraud).

All the more reason for aspirants to have a good understanding of an authentic spiritual process…or at the very least, to not go along with something that seems “bad” ….even if it is “tradition”…this goes for our tradition as well…if it does not “fit well” even if it is for egoistic reasons, keep searching and and learning, with pure intent. 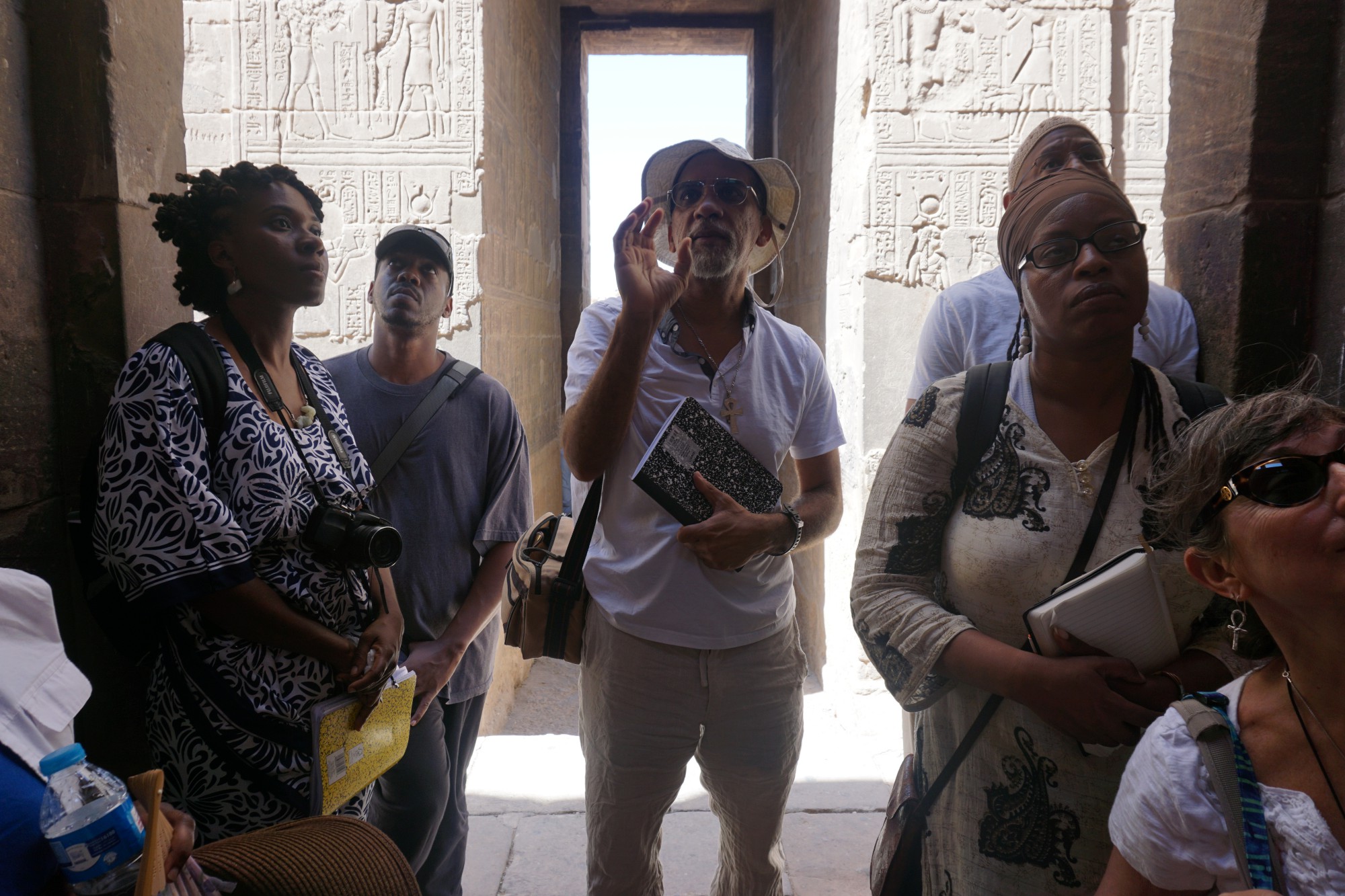 Especially within this forum, our Khnum Nefer group here, it is perfectly okay to “judge” other practices…because here we are emphasizing the steps and principals of authentic spiritual practice…and these you can apply to other non-KMT based authentic mystical traditions, and they should equally apply.

Ny, there are lots of troubling spiritual or religious rituals worldwide…much like there are many expressions of egoism all about..people at different levels. However, we still can judge some action to be egoistic in the world, but this type of judgment is not a judgmental judgement to label the person “bad”, but and informed judgment about what is Maat and what is not Maat.

In another recent post I discussed how my western understanding of African based religions like “Vodou” and Santeria were very different from my Afrocentric understanding and perspective shared through an African teacher…such that I no longer use the terms “Voudoo” in general western parlance to mean “Deceptive or delusive nonsense”, even though I would not advocate the practice of Voudou, and in our forum referred to it as a “kindergarten” religion. In our tradition, we have a higher understanding of sacrifice, and do not use live animal slaughters, as they do, and I do not attend their rituals when we have done programs in conjunction with other African groups. However, they eat the meat (the sacrificed) at the end of the ritual…is this any different from the western meat killing and eating culture that we live in? Is this any different from the meat that is barbecued at the church functions? No…

I would still argue on the side of the humane treatment of animals – not eating them…not slaughtering them…not sacrificing them but my argument would be based on Maat- humans are not anatomically and physiologically meant to eat the flesh of other animals, and the higher understanding of sacrifice, that is, of sacrificing one’s egoism, and also of the higher ideal and perfection of image offerings….such as offered on the Hetep slab, with the leg of beef representing maleness, and the goose representing femaleness and it is duality that is being sacrificed, and this does not necessitate the killing of geese and bulls.

Similarly I would argue/urge the humane treatment of children, and in no way would it be humane to hit children in the head…much less hard enough to leave a mark, and much less have it be associated with “authentic” mysticism/spirituality.

Especially that I’m in the vet field, and this is how they render “anesthesia” to “stun” cattle and other animals before they cut their throats in the slaughter houses…a “ritual” I myself went along with when I believed that eating meat was the real food for humans…before I knew better….but they hit them in the forehead with a stun gun…which is supposed to knock them unconscious.

So when you mentioned that this hit in the forehead is to leave a mark…that struck (no pun intended) me to be very hard, and medically and mystically speaking…putting all my knowledge together, I can find no authentic mystical reason for this practice.

So, your own instinctual and likely informed feeling about the practice is enough to say if indeed they were hitting children in the head hard enough to leave a mark, such a practice has nothing to do with authentic spirituality, and my knowledge of authentic mysticism and spirituality from KMT, Indian Yoga-Vedanta and Buddhism makes me feel quite confident to agree with this .

So yes…there is a need for a certain level of openness to other religions and spiritual practices…when interacting with worldly people, but also, I think there is a need to say, that is not correct in any religious system…as opposed to, I don’t know all the details of this ritual, so I can’t judge it. The latter may be true for some rituals…but the basics should remain the same, follow the laws of Maat as a foundation, and hitting children on the forehead hard enough to leave a mark…just does not.

Similarly, when it comes to other traditions, to say they are kindergarten or immature if they are not practicing authentic mystical spirituality is not judgement against them, but an “informed” knowledge of the religious process…and okay to say in “our circles”…our forum here….but not with egoism of being superior, but with understanding that others are on their own path…as are “we”…and we were once at their level…it’s a process of spiritual evolution.

I don’t know that it can be said about any spiritual/mystical tradition that the whole system, that is, all the different groups that use the general name (Indian-Yoga, Buddhism, Sufism, Ancient Egypt/KMT), are authentic. Each has to be “vetted” and this makes it even more confusing for those who do not understand this. It’s like when I say I practice “yoga”…and the person goes, Oh, I practice too…I practice “Hot Yoga”! LOL! If they were to read my book De-stressing 101, they would realize I don’t consider Hot Yoga, Yoga!

I appreciate your post…and being able to have the further conversation.