In Ancient Egyptian wisdom there is a teaching that dreams are a venue for communication with the neteru (gods and goddesses) one prime example is the Dream Stele at the chest of the Great Sphinx (Heru em akhet) in Giza Egypt.

It tells of communication between the prince and the Sphinx. In Ancient Egyptian temples and hospitals there were sleeping rooms where patients could, guided by the priests and priestesses, sleep in hopes of communicating with the neteru for health or fulfillment of desires. Dreams occur in the astral plane, the plane of mind (Ka). Additionally, there is another teaching of visions. Visions also occur in the astral plane but visions occur when the mind is awake and not dreaming but also not in the physical plane. So visions are the positive aspect of awareness in the astral plane and dream state is the negative aspect. Negative because it occurs when the personality is not in control and is instead passive and caught in the delusion of ego. In visions there is awareness of the illusoriness of the physical personality which occurs in states such as advanced meditation. Also this can occur when the mind becomes sufficiently lucid (ego has been purified and no-longer deludes the personality) to be aware of divine presence during waking plane (physical reality), dream plane (astral/mind plane) experiences- this is also called nehast or spiritual awakening – enlightenment. To the degree that the dream state promotes lucidity through contact with the gods and goddesses (cosmic forces affecting/affected by aryu of Creation and aryu of individual person) and the working out of obstructive aryu of the present and past, to that extent dreams can be helpful but they are not substitutes or preferable to active preceptorial guidance; they are instead complementary to the initiatic process if understood and pursued in accordance with the teaching first by engaging shedy disciplines (ethical living, study of teaching, devotional ritual and meditation) practices with proper guidance. Then unconscious as well as lucid dreams can be helpful to the spiritual evolution instead of just other venues to experience and express human ignorance as most people do.

We are instructed that one of the epithets or titles of God (Supreme Being) is “an sedjer”-sleepless one. So God does not sleep and does not dream. In the PertmHeru text it is requested by the initiate to “see as god sees.”

We are instructed by the blind harper that: “One’s acts on earth are like a dream.”

Therefore we are to realize that ordinary waking reality is illusory and that we should seek to have God vision that does not fall into the delusion of sleeping and dreaming. Rather, we are to seek to regain the experience of uninterrupted awareness, i.e. solar awareness, that is whole and without darkness; as opposed to lunar awareness which is changeable, partial and segmented, with intermittent periods of light and dark. 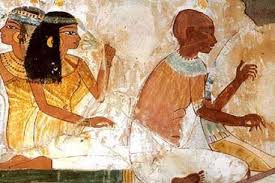