I appreciated that you emphasized the point about going about attaining Neahast in a “not bad way”. As S. Maa said, many people go about doing this in a “bad” way, even using the tool of “yoga” to do so (ex. “Hot” Yoga which is contrary to many aspects of Yoga). As this system is tied to the Serpent Power, Arat Sekhem (Kundalini), one must be aware to approach this practice in a not bad way also. Some practitioners focus on awakening the SP as opposed to an integrated Shedy practice with purification of the ego being a major emphasis. This is like forcing a lotus that is closed, in a young bud stage to open up to bloom. One cannot. One can care for and fertilize and promote…and the lotus blooms when the right conditions have been achieved. Otherwise, with force, the bud is damaged. So too, the serpent can be awakened prematurely by engaging in certain “bad ways” of practicing spirituality, and should this occur, it’s like running the force of the electricity that runs through the large wires on the electric poles directly through the wires of a house…fuses will blow out! So too, the premature – occurring in an unprepared (impure) personality – can blow mental and physical fuses, resulting in illness, which depending on the severity and environment the person is in (around persons who know what is going on) could result in being debilitated physically and or mentally to the point one cannot function as a “normal” person, and even end up being treated for “mental illness”. This hearkens back to the ancient KMT story of the Book of Djehuti, where the aspirant wanted to know the secrets of life {awakened the serpent power}, but was not worthy (purified/advanced enough), and was befallen by misfortune & tragedy as a result [See Serpent Power book for the complete story]. So, the Integral Shedy practices are promoted as they cultivate the spiritual qualities and qualifications and purify the personality in an integrated manner…to allow one’s movement to become htyu- harpoon – one pointed. Even if one is not actively working on the Serpent Power meditation but practicing integral Shedy, one is still purifying the Sefec Ba Ra (Energy centers – chakras), as these are tied to psycho-physical and psycho-spiritual processes, and one is still raising the Serpent Power.

Below are some of the glyphs & and their transliterations and translation for some of the points you reflected on, which were also emphasized in the presentation. 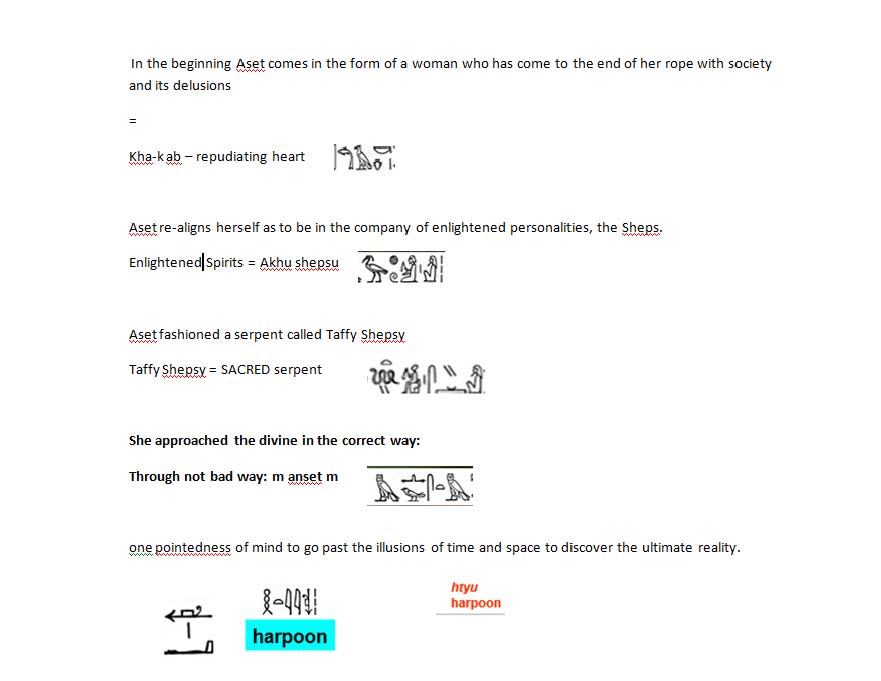