The tiet amulet is indeed a derivation of ankh and appropriated by the Goddess for a special purpose. 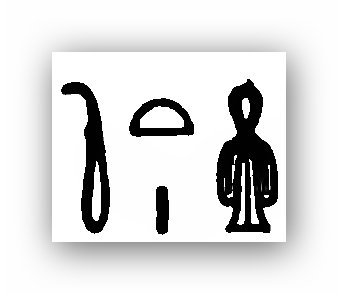 Also known as the buckle of Isis, in the Pert m Hru, it is explained that this is an amulet to be worn around the neck. When charged by following the procedure described, it is composed of the senef n Aset, the Hekau n Aset and the Akhtu n Aset so the blood (physical (corporeal)) essence, the maa kheru or truth of speech (experience of enlightenment) that gives her words power and her spirits (her spirit/life force manifestations as all goddesses and in fact all spirits). This idea of the akh and akhu will be elaborated further as we explore the texts of the teaching of Aset and Ra. So all of this if done and understood constitutes a protection of these aspects of the goddesses power, physical protection, mental (astral) protection and spiritual protection of one’s personal spirit (akh).

It is interesting that you chose this reference:”It is why so many men and women in the penitentiary is able to be resurrected to a new life.”

Indeed, I have often said that the difference between inmates at correctional institutions and people outside in the world is just a difference of levels of confinement; and a person can be more confined than an inmate in a correctional institution if their mind is extremely dull i.e. constricted due to the pressure of egoism; so egoism is the greater confinement over all other confinements and not until there is spiritual advancement can there be true freedom. And indeed this is what the teaching and the understanding an practice of the goddesses teaching bestows: freedom from ignorance, which is the source of that greater confinement. So doing the disciplines of shedy n het Aset (spiritual practices of the temple of Isis) which can include wearing the physical tiet amulet (especially during the Ta level of spiritual worship [remember there are three forms of worship-earth-physical, astral-mental, causal-unconscious]). So the teaching of Aset is for all inmates in the jail of egoism.