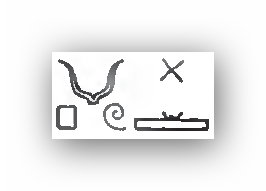 First a clarification and then a wonderful acknowledgement.

On your statement: “Ancient Egyptian religion is an authentic religion where as every religion on the earth today has taken or misconstrued aspects of its teachings or rituals from Shetaut Neter.”

We would not say that every singly religion is derived all or some portion from Shetaut Neter. However, the major world religions and some African Traditional religions certainly have had some contact and have derived some aspects, including major and minor aspects, as outlined and demonstrated in the books.

“I know I am currently a body. (Blood)
I must take part in certain time and space activities such as going to work or I will have no food or shelter (Beer)… But
I am a child of the divine, the divine is where ever he/she is and I am an emanation of her/him in this big illusive dream world called time and space. (Mandrake)”

The english word “but” is translated as “upu” which means but, except, though, etc. This single word pivots the two first elements of this trinity of involvements in realms to turn us from the blood and beer, the worldliness, to the spirit, the transcendent and the glorious. So, “but” is perhaps one of the most important words because it reminds us of the correct teaching and it points to the flaws in worldliness but more than that. “Upu serves to interrupt the insane human tendency to follow self-serving ideas IF the human has the courage to face the implications of the significance of “but” as in but what about this other factor that was not considered? If the but is ignored or rationalized away the human will fall deeper into the delusion of human existence. That is the fallacy of egoism and mental delusion, an insanity that moves away from Maat (righteousness and truth) towards an-Maat, delusion, egoism, unrighteousness and all manner of ramifications including crime and other human degradations. The word but signifies that despite all the stuff that is troubling about life there is something else. Think of how things would be if all we can say is there is blood and beer period! nothing more, nothing else, just constant and perennial worldly activity and endless and final frustration and unfulfilment.

But wait! there is something else, but hang on that’s not all! and that something else saves the nerves, the wits, the soul from future frustrations and sufferings.

So the world is crushing and upsetting upu there is Shetaut Neter to save the day, the week, the month, the year and the life!

“Though all men suffer fated things, those led by reason (guided by the intellect), do not endure suffering with the rest; UPU‘ since they’ve freed themselves from viciousness, not being bad, they do not suffer bad…”