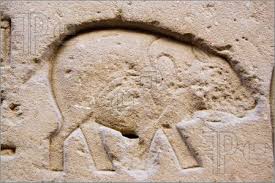 Indeed, the caution to aspirants about the latent aspects of the ego is well taken; As the myth demonstrates, the ego can take many forms, sometimes as a scorpion that stings, sometimes as a bulldozing hippo; at other times as a homely canine or at other times as a part human part insane (as we discussed in the posting #4298) mental constitution. The ego can appear in many forms, sometimes docile and workable and at other times adamant and stiff or at other times subtle but excreting even more power on the personality unbeknownst to the conscious mind. So the caution is to not overestimate the spiritual attainment one has achieved and underestimate the necessity for more unconscious (aryu) cleansing which might rear its head at some point in the future –if it is not 1-dealt with preemptively through shedy, or 2- handled when it arises; meaning being sensitive to its existence and then applying the teachings of maat to it.

Many people become oblivious thinking they have achieved so they are not sensitive to and aware of their egoistic tendencies even when they have some good or even advanced qualities. What is the secure way to move forward as an aspirant? In a word: preceptorship; or in two words: sedjm seba (listening to and heeding the words of the teacher) and not being arrogant and thinking “I am all that” or “I know what the teacher knows” or “I can monitor myself” etc., etc.