Dua for another such a comprehensive and reflective summary.

Re: The practice of Meditation (Uaa) is also key on the path to Enlightenment, and Sebai has written books on various types of Meditation, including the Glorious Light Meditation (GLM). This particular Meditation was practiced in ancient Kemet by the Rekhyt and Hmu alike, and is actually inscribed on the walls of the Temple of Asar in the city of Abdu. The chant “NUK HEKAU” “I am the Word,” “NUK RA AKHU” “I am the Glorious Shining Spirit of Ra,” “NUK BA RA” “I am the Soul of Ra,” “NUK HEKAU” “I am the One who Creates through sound,” gives voice to Divine Union with God.

Seba Dja’s commentary: The Per Aah that built the Asr Temple in Abdu, Sage King Seti Ua (I) is the Per Aah associated with the GLM myth, however, the myth is to be found at a different Temple…specifically the “tomb” (although no body was every found buried there) of Sage Seti I in the Valley of the Kings. 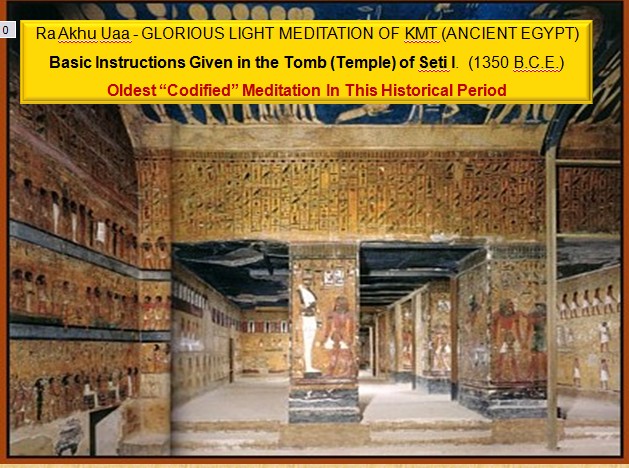