Dua for your reflective responses to the questions,

Re: The issue with the wisdom is that its still known in Africa but many people struggle to actually live it.

Seba Dja comment: Udja, this is true not only for people in Africa, but universally. It is the human plight that is brought forth in our myths such as the Glorious Light Meditation and Asarian Myth. It is the human condition.

The mystical wisdom is actually pervasive…in that is the true reality of all that is, much like the light of the sun onto the earth is pervasive. But it is only when it hits a specific surface, such as water, that we will get a special reflection of the sun. Similarly it is only when the student is ready…when the student’s mind develops the capacity to “reflect” the Divine Self, that the teachings will reveal themselves…the teachings that area already there…placed, according to our creation myth, by Lord Djehuty.

This is why the teachings are referred to as Shetaut – Hidden or Secret and was/is also know as the “Egyptian Mysteries”. 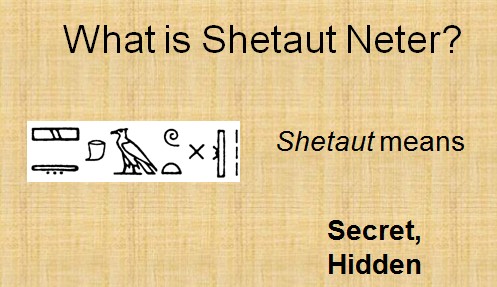 Thus, it is the individual who initiates the process of initiation into the teachings:

“When the ears of the student are ready to hear, then come the lips to fill them with wisdom.”

So, first the student must be receptive…then she/he will meet a preceptor to facilitate him/her on the path…that is the promise of the mystical path! It lies in the readiness of the student!

Re: Is Egyptian Yoga different then Indian Yoga in terms of its pursuit and goal ( union with individual and cosmos.)? A :Sema has the same meaning as Yoga; the union of the higher and lower self. In essence the goal is the same with every yoga system.

Seba Dja commentary: Ny, what you have said is correct, but for completeness, you can further add, “is the same with every other “authentic” yoga system.” This is important because yoga in the west has come to mean only the exercises, and many other things not necessarily in line with the authentic mystical yoga traditions. In our tradition, we use use the term “authentic” to imply that it is the complete practice of the 3 aspects of religion: myth, ritual, mysticism. So, if a yogic system is teaching all of these 3 aspects in an authentic way (teacher is versed in teaching these 3 aspects), then it can be said to be equivalent as Sema (Integral Sema).

Re:
An important piece for me now is aligning myself with the Precepts of Maat.

This aligning of oneself with the precepts of Maat is highlighted in one of the verses of the Maat Ankhu song as: Ha sema Maat: Let every limb join with Maat.

Maat Ankhu Maat – Maat is the source of life
Maat neb bu ten – Maat is in everywhere you are
Cha hena Maat – Rise in the morning with Maat
Ankh hena Maat – Live with Maat
Ha sema Maat – Let every limb join with Maat
(i.e. let her guide your actions)

Dua Maat neb bu ten
Adorations to goddess Maat, who is in everywhere you are!