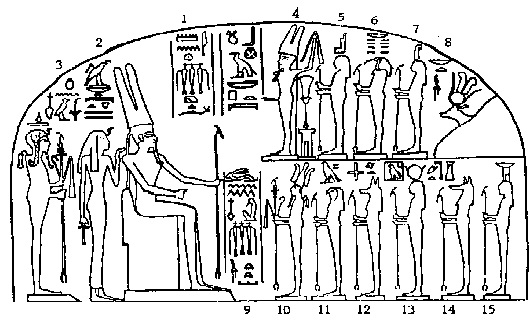 Company of gods and goddesses of Amun

“When therefore, you hear the myths of the Egyptians concerning the Gods – wanderings and dismemberings and many such passions, think none of these things spoken as they really are in state and action. For they do not call Hermes “Dog” as a proper name, but they associate the watching and waking from sleep of the animal who by Knowing and not Knowing determines friend from foe with the most Logos-like of the Gods.”

Udja
A very extensive and reflective posting and very appreciated in its honesty and forthrightness.
A few comments:
On your statement “The two modern day systems that are closest to the Kemetic spiritual system is Hinduism and Christianity.”
Here I will also add Buddhism and Yoruba. Hinduism and Christianity are perhaps closest but Buddhism and Yoruba also deserve inclusion in the list as they display fundamental aspects of Shetaut Neter as well. See the book African Origins of Civilization for more on this.

On the statement: “I got the understanding that creation can’t be a solid reality. Everything in existence is becoming.”
Certainly this is correct from the standpoint of time and space though as the teaching proceeds you will also see how from another perspective the becoming part is as illusory as the solid part; more to come on this in future lessons and classes.

On your statement: “I have come to understand that the reason for all the destruction and self-destruction in the world today is because of the myth that we are taught in the western world.”
Indeed this is a crucial point that if misunderstood leads to untold human disasters, as we have seen throughout history. But not in Ancient Kemet. There, and perhaps in Bhutan, are two examples where humanity understood and as a society followed the correct purpose of myth which led to prosperity and longevity and enlightenment.

In #2 you state; “I am also now become better at listening to the teachings as a source of purifying my heart (mind) instead of using the information to show how intellectual I am. ..etc.”
Certainly, you have stated it rightly and if you maintain patience and perseverance that proper detachment will emerge. So no need for abruptness but rather allow this understanding to gradually deepen and become a mainstay of life; the freedom from worldly sentimental feeling and the development of healthy feeling towards the world will develop automatically from this way of applying the teaching.