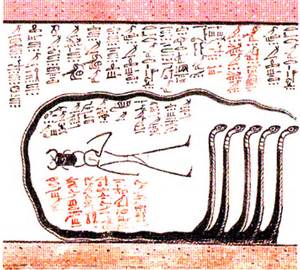 The Scarab is one of the most important symbols in Ancient Egyptian Mythology and philosophy. It represents among other things, creative power and the movement of Ra. The scarab is Khepri and he is the Creator aspect of Ra, who brings Creation into being out of the primordial ocean. We had a brief discussion in the Chatmeeting a few days ago about a special image of Khepri lying on his back on a serpent called Asha Hrau (many faces) and in so doing he caused the primeval ocean to turn into a trinity of physicality and that causes the serpent to churn the ocean and turn into the myriad of forms we see in the world of time and space. The image is above and there is more on this in the books Anunian Theology, the video of Introduction to Shetaut Neter, African Origins and others.