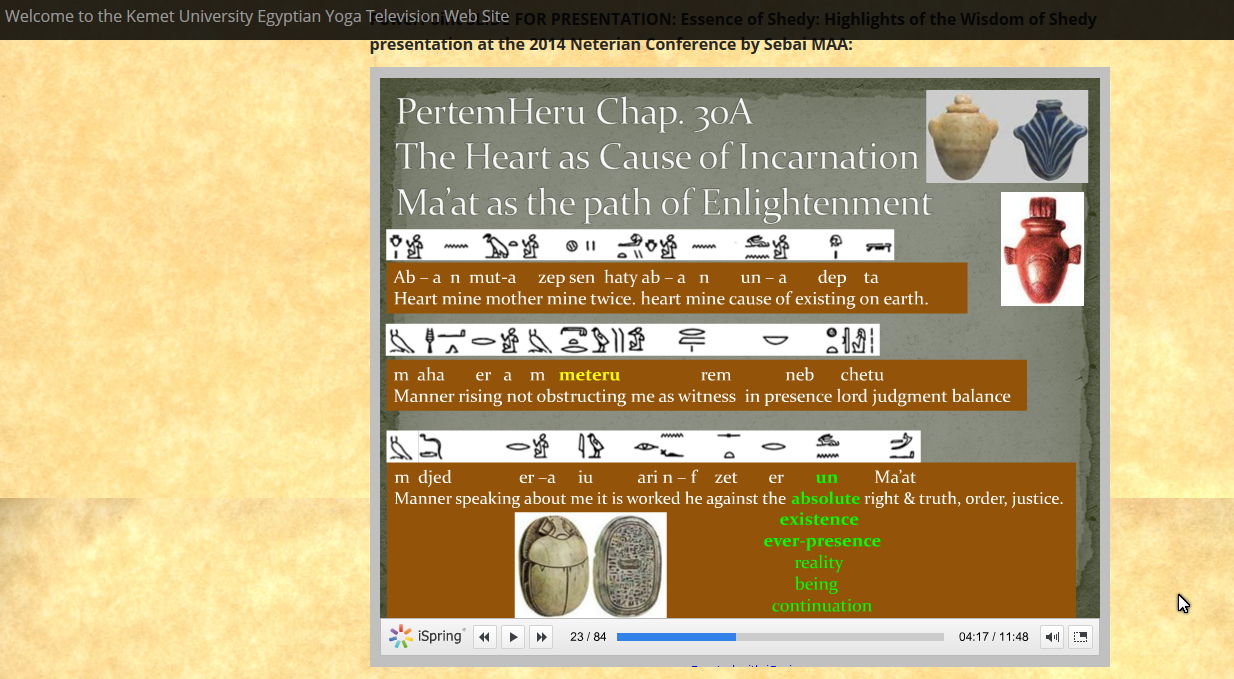 The slide above is from the presentation Essence-of-shedy-highlights-of-the-wisdom-of-shedy-presentation-at-the-2014-neterian-conference-by-sebai-maa-which can be seen at kemetuniversity.com/tv

In your last paragraph you stated: “In awareness my unrighteous thoughts linked with Set, don’t last, so why do I continue to choose unhappiness instead of happiness in that moment. Even my children are not going to be here forever and my family so why do I cling on to them, like a childish little girl as well as silly little things. I hear when Sebai states everything is composed of energy, where thought goes energy follows.”

One question is who is choosing and is there really a choice? Are you really free to make your own choice to be a good aspirant who does everything “good” the way you idealize a higher view of your self and your life?

The teaching related to this predicament of the personality is an important issue that needs to be clearly understood by an aspirant EVEN IF they cannot live up to its meaning in the short-term. I put it that way because it is important to realize that aryu caries information and feeling and the stronger (in terms of effect on the ignorant mind) and more accessible part is feeling. This kind of feeling we are talking about is a kind of memory without reason that a person feels and people say I know it in my gut or a gut feeling or they may say “I know this to be true” and even without evidence or understanding, like President George W. Bush saying God told him to go to war. It was a feeling of angst against Saddam Hussein and his own father issues as well as personal inadequacy deep psychological issues compelling him and that he fixated on to a religious imperative. This is why feeling without knowledge is blind faith and knowledge without feeling is dry intellectualism, like the intellectualism of a sociopath that rationalizes war for no other reason than to settle a personal or family or macho sense of honor or a desire to prove one’s drug abusing and irresponsible criminal past is over by showing how powerful one is by killing (barbarism) and espousing other sociopathic values like capitalism and the despoiling of the ecosystem.

Well, a person can know what is right and still not be able to control themselves. Past Aryu can either impel or compel. If the aryu is weak it impels and a person can choose to follow the desire it gives rise to or not. If the aryu is strong enough as person is compelled to do its bedding; many times we hear of people who flew into a rage and did something they later regretted or saying they don’t know what came over them, or eating the entire quart of ice-cream and knowing they should stop but don’t stop til it is finished, or caring for family or friends or lovers and getting into entanglements and troubles even though they listened to teachers such as Sebai MAA who sounded the alarm! The truth is that even if Aset herself came down from the Pet (heavens) it would make no difference because at that point Set is in control of the the Realm (Kemet, the world, the body) and therefore at that point it is still necessary to put the pieces of the body of Asar together and give birth to Heru – this means cleansing the heart from the aryu that caused the incarnation, the ego to form in the first place.

The serious start of that process is the search for wisdom and higher feeling through ritual, devotional and ethical (Maatian) practices that lead to purity of heart and the birth of solid aspiration that can truly challenge the ego instead of the illusory aspiration that only deludes the personality into thinking they are actually serious aspirants – In such personalities the spiritual challenge fails since the aspiration does not have the capacity to seriously challenge the hold of the ego (negative aryu in the heart) that holds the personality and compels it to act on, be interested in, moved by and finally compelled by situations, relationships and desires related to the world of time and space, which even though the person understands the illusoriness of, is still nevertheless forced to aft on, like a Pavlovian dog. And lest we forget, who allowed this predicament to be created? Indeed, the same person, over many lifetimes. Those lifetimes have caused the initial aryu of worldly delusion to be reinforced and energetically bolstered over thousands of years. So that is not easily undone, though it can be undone over time of serious shedy.

Finally, realize that until the unconscious mind (Ab) is aligned with the conscious mind (Ka), the activities of the Ka will be of intermittent success, not abiding success. So no matter how much a person says “starting tomorrow I will stop eating all the ice-cream” they may stop for a day or two but eventually the impurity wins. So there must be patience and perseverance and self-forgiveness and understanding and relentless effort towards what the mind understands is truth and the heart needs to be kneaded into feeling and experiencing. Then when there is alignment there are no barriers to what can be attained, of course, Nehast being the highest goal.

Therefore, reflect on this important issue as relates to your personal situation and to the wisdom of the temple in general and how it applies to all human beings. Add your additional new reflections as a reply to my post. Other students may feel free to add their comments on this discussion if they wish. For more details you are also recommended to view the Wisdom of Shedy series mentioned earlier.