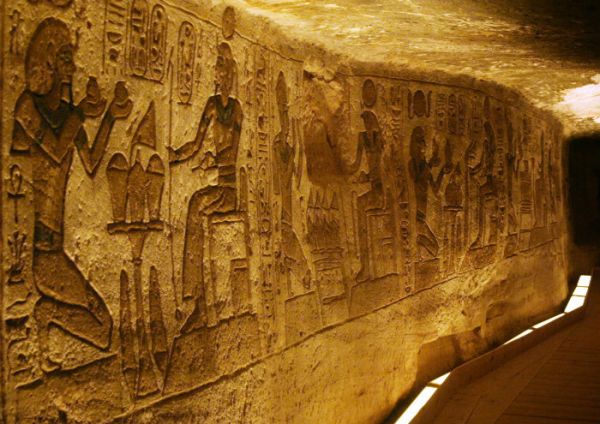 Dua for your post and your interest which has extended to the saturday night shows and opens the opportunity to entertain an expanded discussion.

Indeed, this is a special temple relief that we pointed to while visiting the temple. It contains an image of the Peraah (king Rameses) in his royal garb and he is holding two jars. He is offering those to his Higher Self, who is seated on the divine throne (Aset) and holding the Uas scepter and Ankh instruments of the gods and goddesses. This is a recognition not only that Rameses is recognizing that he has a higher self but that he as king is not higher than his higher self. If the highest ranked person recognizes this, about himself, what is there to say about what everyone else should do?

Many people are shamed by this kind of idea. When we first discussed this during the trip some people scoffed at the idea; and a person who wants to follow Neterianism but unable to follow a well defined and expressed teaching of Neterianism is a manifestation of internal disharmony, misunderstanding or incapacity in accepting the teaching. In reality they might not have been able/ ready to face the reality that they do not or did not really regard their higher self as something real/actual and laudable. One reason is that they are so in touch with, or embarrassed by, or ashamed of, etc. with their lower self that the idea that there can be anything so lofty that is related with their degraded feeling and understanding of themselves was hard to take. This process of movement from the degradation to higher consciousness is a process that takes time but that will not occur if the aspirant is not confronted with the issues and or is unable to face and accept the higher reality of the self beyond the degraded human existence. Therefore, here it is being put to you as it was to the students on the trip; the challenge to recognize your faults and worldly ego thoughts and feelings, that is your Set, your ego. Ok, now realizing that that is not all of you and so what else is there? There is Heru, Aset, Asar but also you yourself have a higher self that is in your personal name and on the same plane with them, so if your name is John or Malika there is a Higher Self aspect of John or Malika and that higher self Malika, Goddess Malika is beyond the egoism and degradation of worldly (ego) Malika. Mind you when we say goddess Malika it means that ego Malika has left the room so Malika would not go to a party and tell everyone to call her Goddess – if that were the case they should be calling her Set.

This is a little different approach of the teachings, and somewhat advanced and really for Level 2 studies but you should be introduced to it now so you can start working with it. Usually, people are cool with thinking of their higher self as Aset or Asar or Heru, as something other than their degraded, and disgusting‡ ego self! So they can discount the ego (and not face up to it) and just focus on Aset or Asar, etc.

Yet it is that same degraded, disgusting, and repulsive‡ ego self that needs to be faced. And facing the ideal of making this degraded, disgusting, repulsive, and hideous‡ lower self pure and elevated -this is a direct and valiant movement in the teachings, taking on the direct responsibility for your evolution and enlightenment.

Nevertheless, if this perspective is too much right now then stay with worship of Asar, Aset or Heru or any other tutelary; until one day the divinity of self, may be possible to be accepted and accessed so that one day not only will there be worship of Asar, Aset or Heru but seeing oneself as deep down being not just a worshiper but also their kin, an entity worthy of sitting next to them, worthy of the same respect and adoration by other gods and goddesses and by regular people (rekhyt) alike.

Who is ready to accept the non-ego realization: “Wow, the proverb: “Men and women are to become God-like through a life of virtue and the cultivation of the spirit through scientific knowledge, practice and bodily discipline.” its not wishful thinking, this is real; the teaching really means we are gods and goddesses.”?

‡I hope you all noticed my deliberate escalating references to the lower ego!!!