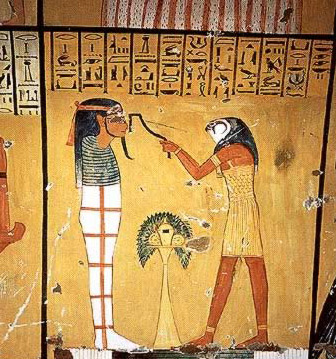 “Salvation is the freeing of the soul from its bodily fetters; becoming a God through knowledge and wisdom; controlling the forces of the cosmos instead of being a slave to them; subduing the lower nature and through awakening the higher self, ending the cycle of rebirth and dwelling with the Neters who direct and control the Great Plan.”

On the whole a good assignment posting. However here you have a circular statement:

A person who has reached Nehast level of consciousness has already “achieved the ultimate goal of Nehast.” So they have done what was needed to be done in order to achieve Nehast and their journey is over no matter at what age that occurs. They do not die but there is no higher goal to be achieved in life. From there the meaning of life is expressing the glory of what has been discovered, wherever and to whomever wants to listen. Nehast means “spiritual awakening”. Just as you wake up only once in the morning no matter how many dreams you may have experienced during the night, in the same way the spiritual awakening of Nehast requires no other awakening, discipline or responsibility – it is true freedom from human experiences–which is after all, in the end, only a mental perception, limited by ignorance and human limited senses. Those who have achieved Nehast do not Create anything nor do they destroy anything; they operate in accordance with the wisdom derived from the higher self and thus ow no allegiance to anyone or thing except to the truth of who they are which is like the sun which benefits all and shows favoritism towards none. Those who come into the light are benefited by that person and those who stay in the shade remain in ignorance.

please revise your statement and re-post again [AS A REPLY TO THIS REPLY). You may ask any questions you need to.
HTP