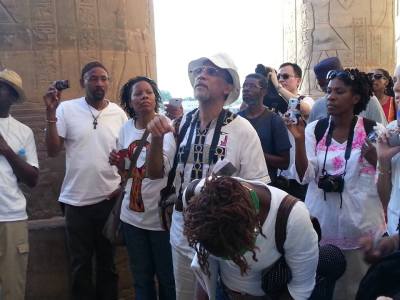 Sebai Maa and followers of Neterianism exercising their human and divine right to study and practice their chosen culture and religion on a recent trip to Kemet.

Very well-reasoned out posting.
In the case of apologizing Mr. Clarke was also including the idea that due to centuries of repression, denigration and intimidation that peoples of African descent have felt shame or ridicule to the point of self-censorship. So the outside force need not impose the policy, the slave mind imposes it on itself and it is the same in political and economics for not only those of African descent are caught up in that negative matrix but also other peoples of other ethnicities and even those of European descent who are not part of the power elite structure. Yet from a relative perspective the ego needs to be well-adjusted to worldly existence and that means pride in one’s culture and legacy but this in healthy fashion and not in deluded fashion. Deluded is my country right or wrong; the Ethical conscience way is: unethical not my country; culture of barbarism not my culture; religion of ignorance and faith-based delusion not my religion. But if the culture, religion or society is based on ethical conscience, order and wholistic living (health of body, mind and soul, myth, ritual and mysticism), then by all means adopt one that is in harmony with the personality and leads it to its highest capacity for evolution (which includes diet, economic and political emancipation, your own temples, rituals, displayed in a manor on par with any other in the world, with spiritual pride, not ego pride, as a human being with all the rights and privileges that come with recognition of oneself as a sovereign and worthy person seeking to discover and reflect the highest expression of divine consciousness regardless of whom it may disturb; for those who are disturbed are indeed mentally impure, as any who understand, who have this correct way of thinking and feeling about their own life and conscience would not seek to denigrate others or deprive them of their natural right as a human and spirit being! So this is not just for African-Americans but for all peoples of any ethnic groups.