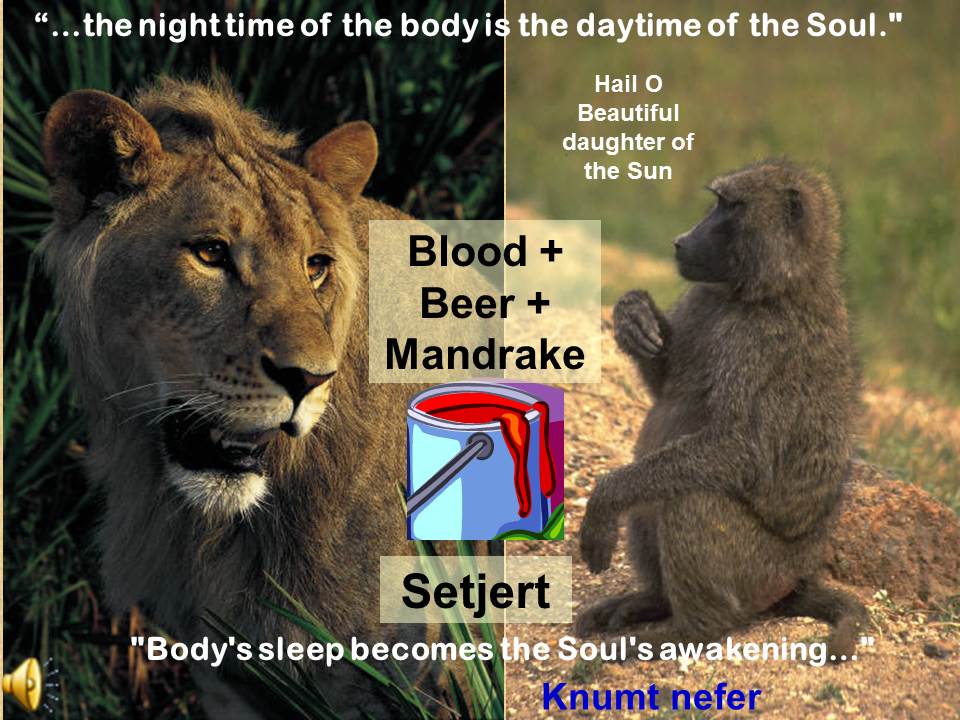 Teaching from the 2005 and 2008 Glorious Light Meditation Presentation

Udja
It is heartening that you have taken such interest in the Glorious Light Meditation myth and its wisdom teaching. Indeed, Hetheru in the form of rampaging Sekhemit represents humanity in a certain stage of being out of control as well as deluded with greed and negative feeling, desiring for that which is unrighteous, violent, agitated and deluded. Each individual also suffers through the states of mind typified by lucidity, agitated, and dull and are struggling to reach lucidity so that from there they can reach for Nehast. Drinking that Setjert drink containing the blood, beer, and mandrake is really more than a ritual; it is also engaging in a process that allows the personality to grow in peace, wisdom, introspection and awareness of the divine entity that one is deep down. So it is the taking in of the wisdom of Djehuty, the spiritual essence of Ra, a calmative and reception of wisdom from the preceptor that culminates in devotion to the teaching and the teacher. Notice that the Setjert was given in the beginning of the interaction between Sekhemit and Djehuty and by listening to his teaching that wisdom, the souls of Ra grew in her and had full expression when her devotion came to a high point after being saved by Djehuty from the serpents. Wisdom saves the aspirant from the ills and evils of worldly existence and devotion to that wisdom as if lifts that wisdom to its heights so that it vanquishes all obstacles and future ills. This is a glorious teaching. So accepting a spiritual path that is compatible with one’s higher spiritual capacity and goal as one’s path, as opposed to practicing a religion of other cultures that is limited and thus deficient, is a necessary step to being able to realize the goal of life.