First let us look to some proverbs to assist our understanding:

“An infant’s Soul is altogether a thing of beauty to see, not yet befouled by body’s passions, still all but hanging from the Cosmic Soul! But when the body grows in bulk and draweth down the Soul into it’s mass, then doth the Soul cut off itself and bring upon itself forgetfulness, and no more shareth in the Beautiful and Good (God); and this forgetfulness becometh vice.”

“The Mind being builder doth use the fire as tool for the construction of all things, but that of man only for things on earth. Stripped of its fire the mind on earth cannot make things divine, for it is human in it’s dispensation. And such a Soul, when from the body freed, if it have fought the fight of piety-to Know God and to do wrong to no one-such Soul becomes entirely mind. Whereas the impious Soul remains in it’s own essence, chastised by its own self.”

“Souls, Horus, son, are of the self-same nature, since they came from the same place where the Creator modelled them; nor male nor female are they. Sex is a thing of bodies not of Souls.”

The human personality has nine aspects and these are emanations from their cosmic source in the Divine Self, i.e. God. So the individual spirit comes from the universal spirit, though attenuated; the individual soul is an extension, though attenuated, of the cosmic/universal soul [Ra, Asar, Net, etc.], etc., etc. The physical is last and grossest aspect and the others are subtler leading to the subtlest which is spirit. Spirit to soul to unconscious to mind to physical. The spirit is not born into the body but merely attunes its awareness to it when the body is ready to receive sense perceptions. Then the spirit, having spent too much time associating with the physical comes to believe it is physical and this is called Khemen or delusion, ignorance, egoism and the idea of an individual soul {Ba}. The physical body has a separate evolution and existence from the spirit. Therefore, the cleaving or clinging occurs after a certain amount of time experiencing physicality and developing aryu (residue of past experiences that are collected and saved in the unconscious mind {ab} of being a physical being which occurs over many lifetimes. Thus, spirit is universal, transcendental and free and soul is what we call spirit when it has come under the spell of physicality, like a wave in the ocean that comes to believe, due to its apparent manifestation which is different from other waves and projecting up from the ocean, that it is an individual and separate from the ocean; when in actuality it is was and will ever be one with the ocean (Akh -spirit). Another way of understanding it is, the individual spirit or soul is a drop and the ocean is the universal, etc. Though unlike a drop, the soul cannot be separated from the ocean except by appearance of separation through delusion born of spiritual ignorance. Enlightenment is when a person dispels that delusion and the process of dispelling is called shedy. For better conceptualization see the diagrams and images below. These are offered only as illustrative study aids and are not to be taken as exact appearances of the elements of the human personality. 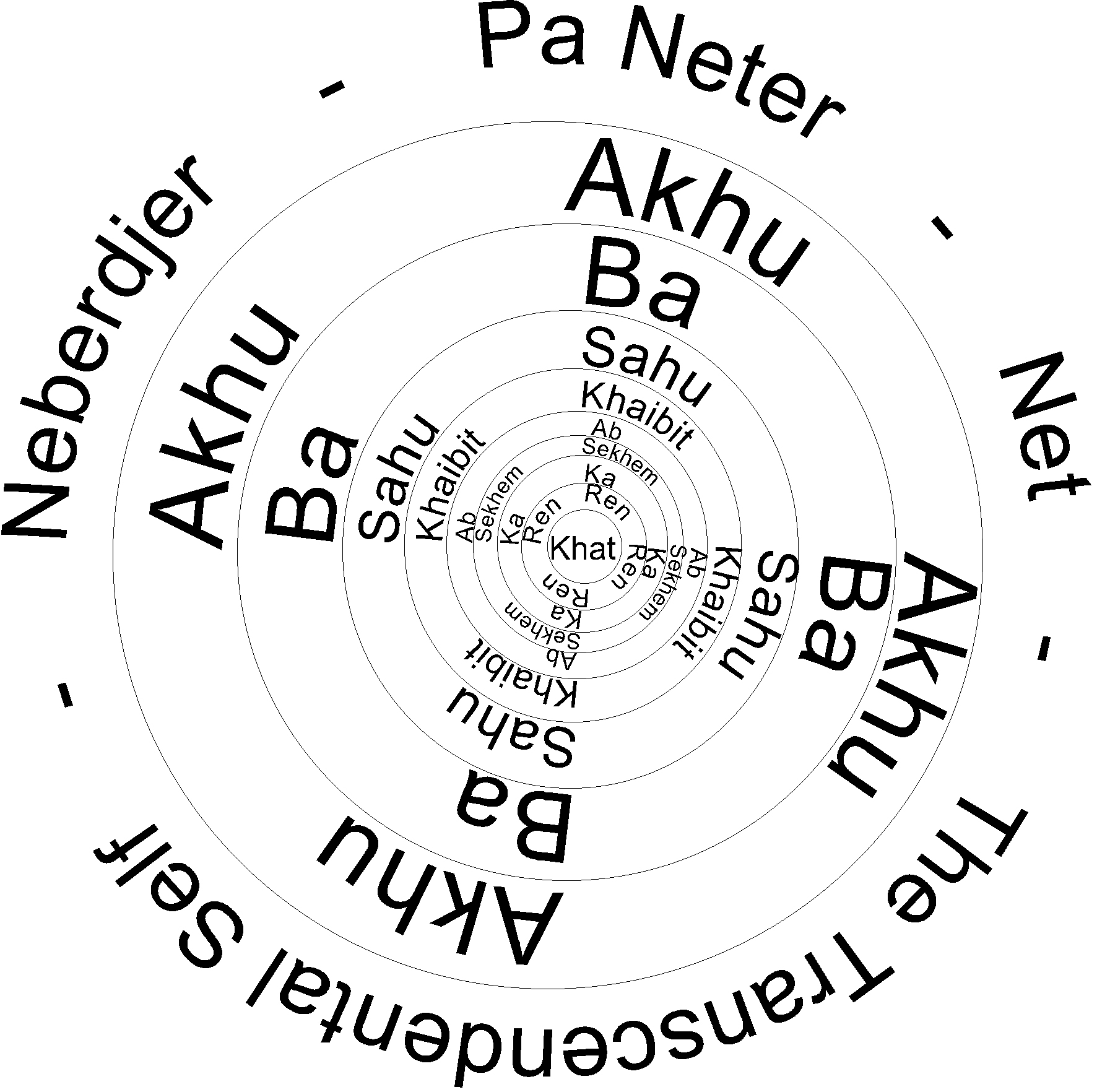