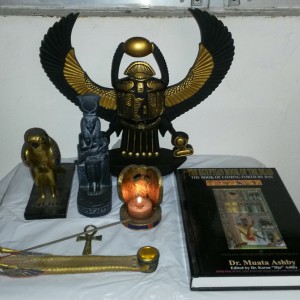 Some of the information you are asking about is located in the Shedy Room page of this web site. Also the offering table is discussed in several of our texts. As well, the worship altar is discussed in the workbook but it has not been reached yet. In brief, the mat is used to enhance the spiritual practice. The enhancement is psychological and psychic. The images facilitate the practitioner to concentrate on the spiritual focus. Also, the placing of the mat and use of it allows a feeling of separation between the personality and the world to ensue and thereby insulates the personality from worldly effects. Bread is a symbol of arit or divine food, in essence the Neterian Eucharist made from the wheat that grows from the body of Asar.

The offering table is the Hetep Slab, often made of stone or on inscriptions, the table symbolizes the duality of existence and the activation of the offering ends the duality and ushers in the non-dual higher consciousness. More on this is to be understood as the spiritual practice and wisdom evolves. Images of the offering table are given here and images of the worship altar are in the Shedy Room. The personal altar can take many forms according to the taste of the worshipper but the basic items are to be included.The personal altar can be as elaborate, ornate or as simple as desired as there is more latitude for devotional practices; here the emphasis is on promoting positive devotional feeling not so much when it concerns the study of philosophy though; that is a more exacting practice.