Udja
the recording of the last Amenemopet lecture has been posted.

The video below is about the example that was given in the lecture about the vacuous, nature of hollywood and how hypocrisy and external appearances of capacity hide incapacity, fear, mental illness, etc., while the ignorant masses believe the lies and incompetence and take that for competence and real worthy models to follow and strive for.

This lecture also follows a theme I introduced earlier in the year about how this culture has forsaken true myth and a true hero journey (as Joe Campbell would put it) and substituted that for literal faith-based religion, based on historicity and literalism, controlled by religious hacks (ministers and priests) or surrendered their mythic life in exchange for popular culture and mythic stories like lord of the rings, Star Wars, Dr. Who, or Frozen controlled by corporate hacks such as Disney or HBO and their show runners/writers for Game of thrones or the worldly hack that George Lucas turned out to be with the Star Wars story, selling it to a corporation that does not care about myth or the society but only money and expressing the pathological, distorted female rage against men. (rage founded in the disparities and injustices of men against women in hollywood particularly but working out those injustices through pathologized hurt and hatred by trying to replace male characters, or destroy even positive male characters and replace them with females of any kind-as opposed to bringing about a substantive therapeutic discussion and action to redress the injustices and bring real understanding and social order based on truth and justice.

These two themes are being highlighted especially for studies of ancient Egyptian clergy relating to reflections on what the standards are for these themes based on Neterian philosophy and for knowing how to respond to these for personal spiritual understanding and for understanding this aspect of the pathology of the society as it relates to the malaise of identity politics, and worship of entertainments and their flawed purveyors as well as for sharing with the community whenever appropriate. 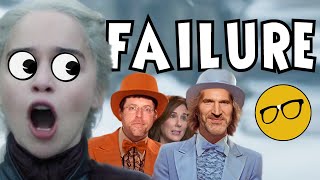