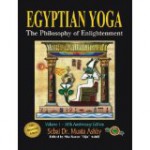 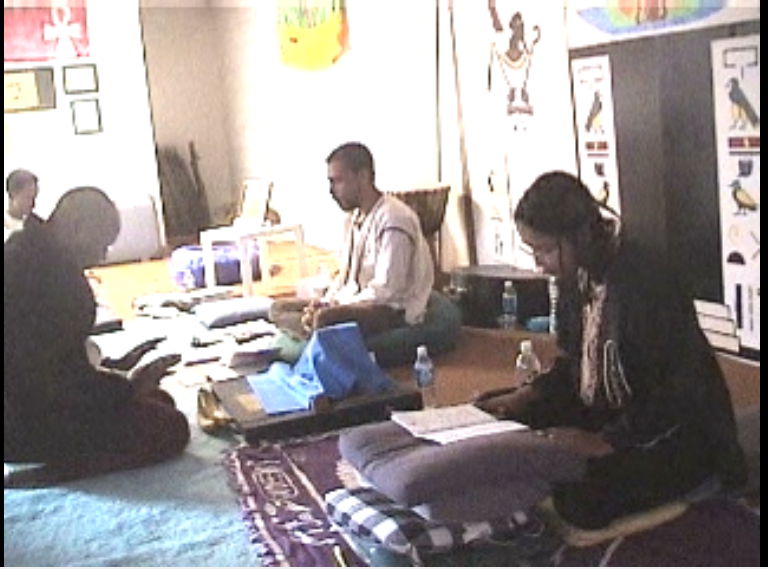 Dr. Muata Ashby began studies in the area of religion and philosophy and achieved a doctorate degree in these areas while at the same time he began to collect his research into what would later become several books on the subject of the African History, religion and ethics, world mythology, origins of Yoga Philosophy and practice in ancient Africa (Ancient Egypt/Nubia) and also the origins of Christianity in Ancient Egypt. This was the catalyst for a successful book series on the subject called “Egyptian Yoga” begun in 1994. He has extensively studied mystical religious traditions from around the world and is an accomplished lecturer, musician, artist, poet, painter, screenwriter, playwright and author of over 65 books on yoga philosophy, religious philosophy and social philosophy based on ancient African principles. A leading advocate of the concept of the existence of advanced social and religious philosophy in ancient Africa comparable to the Eastern traditions such as Vedanta, Buddhism, Confucianism and Taoism, he has lectured and written extensively on the correlations of these with ancient African religion and philosophy.

Muata Abhaya Ashby holds a Doctor of Divinity Degree from the American Institute of Holistic Theology and a Masters degree in Liberal Arts and Religious Studies from Thomas Edison State College. He has performed extensive researched Ancient Egyptian philosophy and social order as well as Maat philosophy, the ethical foundation of Ancient Egyptian society.

Dr. Ashby has been an independent researcher and practitioner of Egyptian Yoga, Indian Yoga, Chinese Yoga, Buddhism and mystical psychology as well as Christian Mysticism. Dr. Ashby has engaged in Post Graduate research in advanced Jnana, Bhakti and Kundalini Yogas at the Yoga Research Foundation.

Since 1999 he has researched Ancient Egyptian musical theory and created a series of musical compositions which explore this unique area of music from ancient Africa and its connection to world music. Dr. Ashby has lectured around the United States of America, Europe and Africa.

In the last two years with the reorganization of the Kemet University and the introduction of the Egyptian Mystery School along with a tailored learning system making use of the Ancient Egyptian Temple teaching elements along with modern technologies Dr. Ashby has engendered a new phase of dissemination of the teachings introducing a new dynamism to the books as well as the live lectures given over the last 20 years.

Dr. Muata Ashby began to function in the capacity of Sebai or Spiritual Preceptor of Shetaut Neter, Ancient Egyptian Religion [Including the Temple of Aset] and also as Ethics Philosopher and Religious Studies instructor. When operating as a professor in an academic setting he is addressed as Dr. Ashby. When operating in the capacity of temple priest he is addressed as Sebai MAA.

Bio for: Dr. Dja Ashby, also called Seba Dja was born in Guyana, South America, as Karen Clarke. She was born to a heritage including African, Native American and European cultures. In 1974 her family moved to the United States.

Dr. Dja Ashby is the co-founder of the Sema Institute of Yoga which is a non-profit organization established by her and her spiritual partner, Dr. Muata Ashby, author of over 60 books on the subject of the origins of Yoga Philosophy and practice in ancient Africa (Kamit – Ancient Egypt) and also the origins of Christian Mysticism in Ancient Egypt.

The Sema Institute is dedicated to spreading the wisdom of Ancient African Kamitan Yoga and the Ancient Egyptian mystical traditions through their books, seminars, online classes, and distance learning courses.

Dr. Dja Ashby and Dr. Muata Ashby have been married for 30 years.

Dr. Dja Ashby is the author of “De-stressing 101: Tools For Living A Stress Free Life”, which teaches how to understand stress and to prevent, stop and counter the effects of stress.

She is also co-author of “Tjef Neteru, Movement of the Gods and Goddesses, The Egyptian Yoga Exercise Workout Book” which details the physical postures and exercises practiced thousands of years ago in Ancient Egypt which are today known as Hatha Yoga in the West. This work is based on the pictures and teachings from the Creation story of Ra, The Osirian Resurrection Myth and the carvings and reliefs from various Temples in Ancient Egypt.

She is also contributing author on “Kemetic Diet, Ancient African Wisdom for Health of Body, Mind and Spirit – The Real “Soul” Food” which presents the concepts and teachings based on the Kemetic (Ancient Egyptian) philosophy of total health of the entire person, that is, health not just of the body, but also health of the mind and soul as well, which gets to the root cause of the dis-ease and eradicates it.

Dr. Dja Ashby is also an independent researcher, practitioner and teacher of Yoga, a Doctor in the Sciences (veterinarian) and a Pastoral Counselor, and has engaged in post-graduate research in advanced Indian Yoga, specifically Jnana, Bhakti, Karma, Raja and Kundalini Yogas

She is a certified Yoga Exercise instructor both in the Kemetic Tjef Neteru Sema Paut (Kamitan Yoga Exercise system) and Indian traditions, and a teacher of health and stress management uses of Yoga for modern society.

Dr. Dja Ashby is a certified and Indian Hatha Yoga Exercise instructor, the Coordinator and Instructor for the Level 1 Teacher Certification Tjef Neteru Sema Training programs, and a teacher of health and stress management applications of the Yoga / Sema Tawi systems for modern society, based on the Kamitan and/or Indian yogic principles.